Golden Sun Universe
Register
Don't have an account?
Sign In
Advertisement
in: Clean it up, Summons, Venus-based offenses, Venus Summons 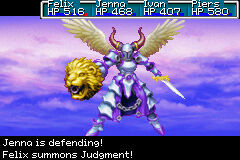 This article or section has been identified as needing to be either cleaned up, reformatted, or rewritten. Please help us improve it by editing.

Judgment is a Summon sequence of the Venus element. When four Djinn of the Venus Element are on standby, the Judgment Summon sequence can be activated. It resembles an angelic knight in the sky gathering power in its lion shield and assaulting the overworld land below, consuming everything including the enemies in an expanding white explosion.

Judgment has a base Venus power of 240 and also does additional damage equivalent to 12% of the enemy’s maximum HP. Judgment is the most useful Venus summon sequence and one of the most widely used of all Summons. It is twice as powerful as Cybele and four times as powerful as Ramses and uses only 2 times the amount of Djinn on standby as Ramses does. It can be very effective against many bosses in both games.

Judgment appears in Golden Sun: Dark Dawn with only minor alterations to his costume, as pictured.

Judgment represents the final days of the earth, representing when God would judge men and ultimately determine if they are to have salvation or eternal damnation. He also bears the symbols of the four evangelists: the bull, the lion, the eagle, and the man.