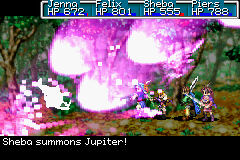 "The elemental power of wind."

Jupiter is the first Jupiter-based Summon sequence both in Golden Sun and Golden Sun: The Lost Age. When one Djinni of the Jupiter Element is on standby, the Jupiter Summon sequence can be activated. It resembles an image of a Jupiter Djinni summoning a range of large purple orbs to assault the enemy party. It has a base Jupiter power of 30 and also does additional damage equivalent to 3% of the enemy’s maximum HP.

Jupiter in Roman mythology was the ruler of the gods and was also in charge of laws and social order. His Greek equivalent was the god Zeus.

Jupiter full sequence
Add a photo to this gallery
Retrieved from "https://goldensun.fandom.com/wiki/Jupiter_(summon)?oldid=26256"
Community content is available under CC-BY-SA unless otherwise noted.