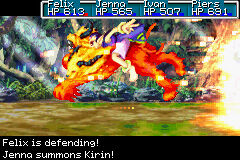 "A mystical beast cloaked in flame."

Kirin is a Summon sequence of the Mars element. When two Djinn of the Mars Element are on standby, the Kirin Summon sequence can be activated. It resembles a humanoid on a flaming, two-headed four-horned canine dashing from a forest and charging through the opposition, followed by a wall of fire.

Kirin makes a return appearance in Golden Sun: Dark Dawn, functioning as a Mars-aligned summon that require 2 Mars Djinn On Standby. Kirin, now depicted as a one-headed two-horned beast, is seen running down a volcanic mountain path, and it and its rider merge into a single ball of fire that rushes through the opposition with great speed.

Kirin is the Japanese and Korean word for Qilin, a creature in Chinese mythology. It is a mythical dragon- or stag-like hooved, horned creature who often arrives in conjunction with the birth of a sage or king. It has been seen as a sign of good fortune and is often depicted as having fire all over its body.

Kirin full sequence
Add a photo to this gallery
Retrieved from "https://goldensun.fandom.com/wiki/Kirin?oldid=42913"
Community content is available under CC-BY-SA unless otherwise noted.