Lava Shower, Molten Bath, and Magma Storm are a series of Mars Psynergy featured throughout the Golden Sun series. Prior to Golden Sun: Dark Dawn, the series's visual effects were shared with the Volcano Psynergy series. 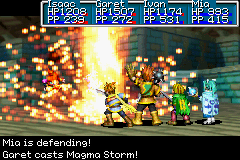 Lava Shower is an offensive, single-target Psynergy, while Molten Bath and Magma Storm are offensive, ranged Psynergies. The total amount of damage is determined by comparing the user's Mars Power to the target's Mars Resistance and using this value to modify the base power of the particular Psynergy.

Lava Shower: “Attack with a volcano's might.”: This costs 4 Psynergy Points, has a base power of 40, and has a range of one target. A fiery pillar explodes through the enemy. It is available at level 8.

Molten Bath: “Attack with a volcano's might.”: This costs 12 Psynergy Points, has a base power of 70, and has a range of three targets. Two fiery pillars explode through the enemy party. It is available at level 22.

Magma Storm: “Attack with a volcano's might.”: This costs 27 Psynergy Points, has a base power of 120, and has a range of five targets. Four fiery pillars explode through the enemy party as the camera swivels around. It is available at level 48.

In Golden Sun and Golden Sun: The Lost Age, the Lava Shower's visual effects are identical to those of the Volcano Psynergy series, featuring cylindrical pillars of fire that erupt below the target. Lava Shower shows one pillar, while Molten Bath shows 2, and Magma Shower shows 4. In Dark Dawn, the visual effects are more detailed. Lava Shower shows a small burst of lava emerging from beneath the targets. Molten Bath shows a slightly larger burst of lava, which sends rocks flying. Magma Storm shows multiple bursts of lava, which sends multiple rocks flying.

Elemental Power attacks such as Lava Shower, Molten Bath, and Magma Storm use a set base power as the base damage to be modified. For example, the base power of Magma Shower is 120. Thus an unmodified Magma Storm would do around 120 points of damage.

Magma Storm's attack takes this base damage value and uses it in the following equation:

For example, if an Adept with a Mars Power of 150 casts Magma Storm on a monster with a Mars Resistance of 50:

Therefore, a Magma Storm cast under these circumstances would deal approximately 180 points of damage to the targeted enemy. Since Magma Storm is a ranged Psynergy, adjacent targets take a percentage of the total damage, with the percentage decreasing as distance from the main target increases.

Unlike other Psynergies, which can see use due to being the only series of their element available to the class, the Lava Shower series is also outclassed by the Samurai's Dragon Cloud and Epicenter Psynergies. Dragon Cloud is more powerful than Molten Bath, while being less expensive, while Epicenter is nearly twice as powerful as Magma Storm. Thus, the Lava Shower series will see little use.

Retrieved from "https://goldensun.fandom.com/wiki/Lava_Shower_Psynergy_series?oldid=42676"
Community content is available under CC-BY-SA unless otherwise noted.