Golden Sun Universe
Register
Don't have an account?
Sign In
Advertisement
in: Places in the Eastern Sea, Islands and Islets, Places, Golden Sun: The Lost Age

Lemuria is an island located in the center of the Great Eastern Sea after successfully navigating the Sea of Time's puzzles and defeating Poseidon. The small island is the home to the advanced, but stagnant, civilization of the same name.

By the time of Golden Sun, Lemuria is probably the only advanced civilization remaining on Weyard--although one would be hard-pressed to say that it is also thriving. The island still retains its wonderful buildings and powerful Psynergy, and its people age little. They still maintain strong and amazing ships that can be moved by Psynergy alone, without need of oars or sails. A Lemurian might live for many centuries.

However, the glory of Lemuria is long past. Its people are bored, and there has been little growth in the civilization since the Elemental Lighthouses were sealed. Nothing new has been built, and ancient parts of Lemuria have become submerged. Even knowledge of the outside world is lacking.

Lemuria is located in the centre of the Sea of Time, a region of the Eastern Sea surrounded by many rocks and whirlpools. It is covered with fog, and is guarded by Poseidon. It is very hard for any ship to navigate. Piers only escaped because of the tidal wave that carried his ship out. Before Golden Sun: The Lost Age, the only person known to have successfully navigated the Sea of Time was a master boatsman from Yallam named Yepp. Although Yepp had passed on before players ever reach Yallam, he left behind instructions for navigating the Sea of Time hidden within a children's song.

Lemuria's people, as well as any visitors, age very little. In Lemuria, time appears to pass much more slowly, although this may simply be an illusion created by the slow rate at which Lemurians age. However, because of their long lives, they have lost vitality. There are few children (only two are seen during The Lost Age), and most people are extremely bored, doing nothing. Had King Hydros not ordered people to eat, the people of Lemuria might have stopped doing that as well.

Piers and Lunpa are notable characters who have resided on the island.

Lemuria is ruled by King Hydros and a Senate. The King resides in a large palace, while the Senate works in the House of the Senate. The king and his senators, most notably Lord Conservato, do not always agree on issues, and they can spend a long time arguing. There are times when the Senate appears to have more power in Lemuria than the king. Decisions made by the Senate tend to influence popular opinion in Lemuria. The Senate passed a law that forbids Lemurians from leaving, which may have been a result of Babi's actions.

As of Golden Sun: The Lost Age, the Senate is against any form of change (King Hydros is perhaps much more progressive). This is most apparent in their insistence on keeping the Elemental Lighthouses unlit. Their concern is understandable, considering how Alchemy was abused in the past and nearly brought about the end of the world. However, their refusal to accept change borders on stubbornness and arrogance, as Lord Conservato refuses to believe that Weyard was (metaphorically) dying. As Lunpa said: "He refuses to acknowledge what he can see with his own eyes!" This arrogance is also reflected in most Lemurians' scornful view of the outside world (as Conservato puts it, decline is only the way of the outside, not of Lemuria) and equation of change with ruin.

Lemuria once produced a magical draught that would allow visitors to extend their lives, even after leaving Lemuria. However, because of the actions of Babi, production of the draught has ceased. Instead, Lemurians keep themselves alive through the water in the fountain in the center of the town, which has the same effect as the draught. Despite their long lives, sickness is unknown to Lemurians, while death is not. The draught and the fountain only extend their lifespan and cannot keep them alive forever.

The Lucky Medal Fountain in Lemuria is found in the center of what appears to be the town square. The water from this fountain is what grants Lemurians their incredibly long lives. It also features a minigame of sorts, where people face away from the fountain and toss in coins or Lucky Medals. They then receive a prize depending on where the coin or Medal landed. During his stay in Lemuria, Babi became fascinated with this game and decided to build one in Tolbi.

By drinking the water in the fountain, Felix and the entire party can restore all their HP and PP. By tossing Lucky Medals into the fountain, players can gain some powerful equipment, such as the Hestia Blade and the Crown of Glory. Perhaps the most valuable prize, however, is the Eclipse Summon, which is received the first time the player lands a Lucky Medal in the center of the spring.

Rime: After receiving the Grindstone from King Hydros, an ancient section of Lemuria becomes available. Rime is hiding in this area. Cast Cyclone in the bottom left area to bring Rime out of hiding. Afterwards, Rime hides in a nearby statue similar to those found in Mercury Lighthouse. Cast Tremor to bring Rime out into the open again, after which it will join your team without opposition.

There are a number of unlisted items buried throughout Lemuria, including a Bone and at least one Lucky Medal. These items can be found using Reveal and obtained using Scoop.

Spoiler warning: The following section(s) contain plot and/or ending details that some people may not wish to learn before reaching this point in the game on their own. If this applies to you, take caution while reading this section (if you choose to read it at all).

After Alchemy was sealed away, Lemuria entered a slow but steady decline. Over time Lemurians lost contact with the outside world, and, because little changed in Lemuria, the people began to lose interest in just about everything. Although Alchemy no longer existed in Weyard, Lemurians were able to keep themselves alive with the water from their fountain. They also produced a mystical draught that allowed them to maintain their extended lifespan outside of Lemuria, and was also capable of keeping outsiders alive.

Over 100 years before Golden Sun: The Lost Age, Babi and Lunpa were traveling Weyard when a flood of some sort brought them to Lemuria. Apparently they were welcome to stay in Lemuria, and Lunpa remains there to this day. During their time in Lemuria, Babi was taught how to use some Psynergy. Lunpa probably also learned how to use Psynergy, although this is purely speculation. Babi was also enchanted by the game in the fountain, which inspired him to build one in Tolbi later on. Eventually, Babi stole some of Lemuria's draught and a Lemurian ship, after which he returned to Tolbi and ruled up to meeting Isaac's party during Golden Sun. Babi's actions resulted in halting the production of the draught, and is possibly the reason why Lemurians are no longer allowed to leave.

While comparing Lunpa's map of Weyard with his own, King Hydros noticed that the continents had begun breaking apart and the entire world was shrinking. His most trusted scholars came to the conclusion that Weyard was eroding and would eventually be destroyed. Somehow they realized that this was a result of Alchemy being sealed away. Shortly before The Lost Age began, King Hydros asked Piers to leave Lemuria and confirm his fears. Before Piers could actually leave, Poseidon awoke and caused the tidal wave that destroyed Briggs' boat and wedged Indra between Gondowan and Osenia. The tidal wave carried Piers and his boat away from Lemuria and caused him to crash near Madra.

After joining Felix's party, traveling the Great Eastern Sea, and fighting their way past Poseidon, Piers was finally able to return to Lemuria. Unfortunately, they arrived right in the middle of a meeting between King Hydros and the most influential member of the Senate, Lord Conservato. While waiting for a chance to speak with the king, Felix and Co. visited Piers' uncle and learned that Piers' mother has passed away. Upon hearing this, Piers leaves the party for a short time while Felix and the others meet with Lunpa. Lunpa is informed of Babi's passing and Dodonpa's ruling of the village of Lunpa. Kraden then reveals his theory about how the great civilizations of Weyard began fading away once Alchemy was sealed, and that the rest of the world may follow.

After this, Lunpa took Felix's party to meet with King Hydros and Lord Conservato, and Piers was already there. King Hydros presents the maps of Weyard in Lemuria's time and in Lunpa's time, and Piers states that Weyard and it's continents appear to have shrunk even further since then. Kraden then compares Weyard to a living being, with the elements being the nourishment that keeps it alive. When Alchemy was sealed, Weyard went into a hibernation-like state, using less energy to keep itself alive. However, if Alchemy remains sealed, Weyard's "spring" will never come and it will be unable to replenish its energy. Because of this, Weyard is shrinking, wasting away, dying. Lord Conservato becomes outraged at this, regarding the comparison of Weyard to a living being as completely false, and stubbornly insisting that lighting the Lighthouses will only result in mankind abusing Alchemy like in the past. Despite Conservato's warnings, Felix and Co. depart Lemuria, more determined than ever to light the remaining Lighthouses.

Note: the map that King Hydros shows them largly resembles the real supercontinents Gondwana and Laurasia that existed 500 million years ago

Although it doesn't actually appear in Golden Sun: Dark Dawn, Lemuria is mentioned occasionally. An NPC in Tonfon mentions that Lemuria has refitted some of their ships, indicating it had more open relations than previously seen. Also, one NPC in Yamata City notes that it is a highly advanced civilization to the south that has sunk, although it is not explicitly stated whether or not this is Lemuria and it is possible that this refers only to the changes of sea levels.

In the real world Lemuria is a fabled sunken city much like Atlantis. It sunk beneath the waves due to a great cataclysm. It apparently resided in the Indian Ocean off the coast of Madagascar and was home to a reptilian race of creatures. Coincidentally, Prox is home to reptilian humans. 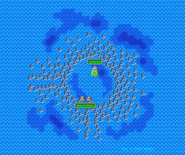 Composite of the self-contained overworld map with Lemuria and the Sea of Time enterable locations marked
Community content is available under CC-BY-SA unless otherwise noted.
Advertisement