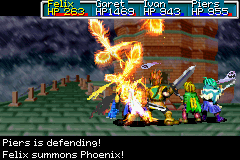 The Lich Psynergy set is a series of two Support Psynergies available to the higher Tamer Class series, not the base one with no djinn. The set is slightly unique because the later Psynergy, Phoenix, costs no more and does no more than the previous Psynergy, Lich. The only change is a different visual. Compared to revive, it also has a different visual and costs less than the 15PP required, with the same effects. Because of this it is most comparable to Helm Splitter and Skull Splitter. The entire series is available at Level 28, costs 10 PP, and all techniques revive a single Downed Adept.

In spite of having effectively the same function as the normal Revive Psynergy, these are not Utility Psynergies.