There are some Psynergy spells that can only be used by enemy Adepts, such as Agatio. The player cannot use these without a hacking device and can only see them when battling the appropriate enemies. Enemy Psynergy differs from Monster Skills in that a Psynergy seal will not prevent enemies from using the latter. It is possible to tell the difference in-game because the battle text says that enemies "use" or "unleash" Monster Skills and "cast" Psynergy. 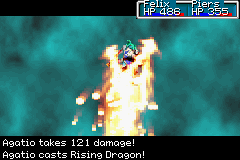 Rising Dragon is a powerful single-target Psynergy that is only used by Agatio. It has no in-game description since the player is unable to acquire it without using a hacking device. Unlike monster skills, this counts as an actual Psynergy spell because it uses PP (37 PP, to be precise). It materializes as a flaming dragon that erupts from beneath the target's feet, seizes him or her in its jaws, and ascends toward the sky and explodes, sending the adept careening back to the ground. It has a base Mars power of 250.

Spoiler warning: The following section(s) contain plot and/or ending details that some people may not wish to learn before reaching this point in the game on their own. If this applies to you, take caution while reading this section (if you choose to read it at all).

There are three chances during the story of Golden Sun: The Lost Age for the player to witness Rising Dragon. The first is shown in a battle cut-scene at Jupiter Lighthouse where Agatio uses it to knock out Isaac; the second when he may also use it in the following boss battle where the player fights both him and Karst. The final time the battle against the Flame Dragons in Mars Lighthouse, as these dragons are Agatio and Karst; though, Rising Dragon is only used by the dragon on the left side of the screen. Although there are no more chances to see Rising Dragon in the main story, players may encounter Agatio or his Flame Dragon form in Battle mode.

Spoilers end here. Those who did not want the plot ruined for them may now continue reading as normal. 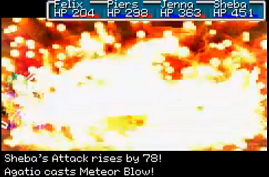 A Mars Psynergy used by Agatio. It appears as a meteor which quickly enters the atmosphere before smashing into your characters from above. To some extent, it resembles the Meteor summon in appearance. It only appears while battling Agatio. It costs 21 PP to use, does damage equivalent to 35% of the target's HP in addition to having a base Mars power of 120, and has a range of five targets.

Earnest Ply costs 12 PP and restores one ally's HP by 1000. It can only target the Star Magician or (if he is not an ally of the caster) on the caster themself. Other than that, It is completely identical to the Pure Ply Psynergy, with the obvious exception of their names. It is used by the Refresh Ball summoned by the Star Magician. It could also be a mistranslation, and "Earnest Ply" is the Japanese name for "Pure Ply".

Kraden has reviewed the contents of this article and believes it could do with a bit of expansion (it is a stub). Please oblige him to meet the quality standards of the rest of this tome of knowledge.
Community content is available under CC-BY-SA unless otherwise noted.
Advertisement