The Magic Shell Psynergy series is a Support Psynergy found in both of the Golden Sun games. Both are Jupiter based and only available to the Samurai class series, meaning that only Felix, Isaac, Garet, and Jenna have access to this series.

This series is identical to the Ward Psynergy series. 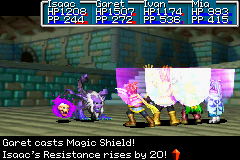 Magic Shell costs 3 PP, and is used to boost the Resistance of one Adept by 40. It can be used again to an increase of 80, max. It is available at level 10.

Magic Shield costs 5 PP, and is used to boost the Resistance of the entire party by 20, with 80 once again being the max. It is available at level 27.

A fairly staple move to the RPG genre, raising your own resistance can be a lifesaver in battles with enemies that rely on high-power Psynergy. Although most bosses can cast Break and considering that the effects only last for a few turns, the party may find themselves casting Magic Shell/Magic Shield only to have the effects wear off before the enemy attacks, hence wasting a turn and some PP. However, against certain bosses, such as the Star Magician, who, along with his ball minions, repeatedly cast Psynergy, Magic Shell/Magic Shield can be a highly useful Psynergy.

Retrieved from "https://goldensun.fandom.com/wiki/Magic_Shell_Psynergy_series?oldid=29384"
Community content is available under CC-BY-SA unless otherwise noted.