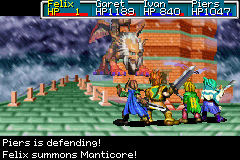 The Manticore Psynergy is one of the stand-alone Psynergies available to the Beast Lord class. It takes both its name and appearance from the enemy Manticore.

Manticore is aligned with the Mars element and costs 18 PP to use. It functions as a curative Support Psynergy; when cast, a Manticore appears and red sparkling energy, similar to that created by the Aura Psynergy series or the summon Iris, flows into each of the party members. It restores roughly 300 HP to all affected characters.

While many of the abilities of the Tamer Class series are somewhat unextraordinary, Manticore is actually a decent overall ability. It restores 120 more HP than the Beast Lord's other group healing power, Estre Wood, for only 4 more PP. When compared with other Psynergies like it available to different classes, it beats the healing power of Cool Aura by 100 HP for only 2 more PP, and almost matches Pure Wish's 400 HP healing while being 2 PP cheaper.

Retrieved from "https://goldensun.fandom.com/wiki/Manticore_(Psynergy)?oldid=42368"
Community content is available under CC-BY-SA unless otherwise noted.