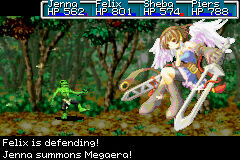 "The goddess of vengeance."

Megaera is a Summon of the Mars element that appears in Golden Sun: The Lost Age and Golden Sun: Dark Dawn. It is one of fourteen summons that is not automatically accessible once the required Djinn are obtained. Instead, Megaera must be specifically acquired by interacting with a stone tablet that contains the summon.

As previously mentioned, Megaera must be acquired from a stone tablet before being summoned. In The Lost Age, its Summon Tablet has been found and collected in Osenia Cavern, located in between Mikasalla and Air’s Rock. The Scoop Psynergy is required to be solved in order to get to the tablet. In Dark Dawn, Megaera's Summon Tablet can be found at the Konpa Shrine, near Harapa and after the Konpa Ruins.

After being acquired, a successful summoning of Megaera requires that the player have one Mars Djinn and one Jupiter Djinn on standby. Megaera has a base Mars power of 40 and also does additional damage equivalent to 6% of the enemy’s maximum HP. In addition, all current battling Adepts have their attack ratings increased by 12.5%. In addition, the summoner's Mars Power and Jupiter Power will be increased by 10 points each.

In The Lost Age, Megaera's summon sequence features a pair of large swords landing into the ground on either side of the enemy party, then a giant red whirlwind engulfs the enemy party for a moment before Megaera herself, a young goddess with angel wings and a pair of large swords, emerges from the whirlwind and both disappear. In Dark Dawn, Megaera's lengthier sequence features four large swords, of varying design, landing on the ground, forming a square around the enemies. A design appears on the ground, causing the swords to glow. The targets are engulfed in an explosion that sends them and the swords upward. The swords circle around Megaera, then disappear.

Megaera is among Zagan (Venus), Flora (Jupiter), and Moloch (Mercury) as a Summon that can be used as a “placeholder” summon for more powerful “traditional” summons, in this case for Kirin because Megaera can be attained and used before one can summon Kirin with two Mars Djinn. Megaera is rarely used at all, though; her power rating is only 2/3rd that of Kirin. In The Lost Age, both Megaera and the second Mars Djinni used for summoning Kirin can be acquired at the same time once the Scoop Psynergy is earned, thus most would rather opt to just use Kirin for the increased summon power. Megaera’s additional effect of giving the party a physical attack boost of 12.5%, up to a maximum of 50%, is what is meant to make Megaera a viable alternative to Kirin. Megaera can therefore be viewed as a slight Mars attack combined with the effect of the High Impact Psynergy, and since High Impact is not learnable until level 22, Megaera functions as a good replacement for that purpose. Like Zagan, though, Megaera quickly becomes underpowered in the grand scheme of things.

In mythology, Megaera was one of the three Erinyes, goddesses of vengeance who pursue their targets relentlessly. One of her sisters is referenced in the Golden Sun weapons, Tisiphone Edge.

Retrieved from "https://goldensun.fandom.com/wiki/Megaera?oldid=42561"
Community content is available under CC-BY-SA unless otherwise noted.