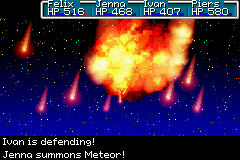 "A meteorite from deep space."

Meteor has a base Mars power of 240 and also does additional damage equivalent to 12% of the enemy’s maximum HP. Meteor is the most useful Mars summon sequence and one of the most widely used of all Summons. It is twice as powerful as Tiamat, four times as powerful as Kirin, and uses only 2 times the amount of Djinn on standby as Kirin does. It can be very effective against many bosses in both games.

In Golden Sun: Dark Dawn it was extended to show that the meteor is sent by the actual summon, which is a sort constellation.