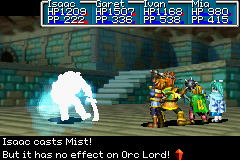 Mist: "Wrap a foe in a cloud of delusion."
Mist is a Jupiter-based support Psynergy featured in both games. Mist is only available to the Ninja class series--meaning that all Adepts but Mia and Piers can use it. Hitting three targets at once, it does nothing more than try and put the Delusion condition on them; in effect, mimicing the Baffle Card and Delude abilities. It is learned at level 7 and costs 4 Psynergy Points. It is the only Psynergy available to a Ninja that is not some sort of attack. It appears as a cloud of smoke at the foot of an enemy.

Mist will see very little use, as the Ninja class is not available until late in the first game, and mid-way into the second, and many parties are usually strong enough to dispatch common monsters within a turn or two, giving Mist very little chance of use. The only possible use is against bosses, but so late in the game, almost all bosses are unaffected by status conditions, and rarely use a standard attack anyway, making the Delusion useless. As it is available so late in the game, many people would prefer to use the Delude Psynergy, which is available as soon as you have acquired your first Jupiter Djinni, giving Mist even less credit in battle. Mist is down-trodden even more by the Ninja class series having incredibly high Attack, and an assortment of offensive Psynergy which makes use of this high Attack, making them much more use in battle than a possibility of a Delusion.

Retrieved from "https://goldensun.fandom.com/wiki/Mist_(Psynergy)?oldid=36489"
Community content is available under CC-BY-SA unless otherwise noted.