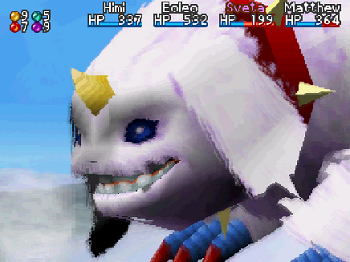 Moloch is a Summon of the Mercury element first appearing in Golden Sun: The Lost Age. Moloch is one of fourteen summons that is not automatically available once the required Djinn are collected, but must be specifically acquired from a stone tablet containing the summon.

Before Moloch can be summoned, the player must first acquire the summon from a Summon Tablet. In The Lost Age, Moloch's Tablet is found in an inner chamber in the Madra Catacombs. The summon can only be accessed after Piers joins the party. In Golden Sun: Dark Dawn, it is found in the North Wall Shrine in the Khiren Highlands region of Angara. The summon must be acquired before requesting Arangoa Prelude from Belinsk's band, or the summon will be permanently lost by normal means. However, it can be accessed by means of the Endless Wall glitch. However, after doing this, northern Angara cannot be left by conventional means. The only way to return to the rest of the game is to fall in battle without having visited any towns since performing the glitch, which will send the party to the sanctum of the most recently visited town. Because of this, while Moloch might appear to be permanently missed, if glitches are used, it always remains possible to obtain it.

For a successful summoning of Moloch, the player must have two Mercury Djinn and one Jupiter Djinni on standby. Moloch has a base Mercury power of 100 and also does additional damage equivalent to 9% of the enemy’s maximum HP. In addition, all foes have their agility ratings cut down to 50%. Afterwards, the summoner's Mercury Power and Jupiter Power will rise by 30 and 10 points, respectively.

In The Lost Age, Moloch's summon sequence features a massive, white-furred, single-horned dog-like monster appearing out of a falling snowstorm and breathing ice at the opposition. In Dark Dawn, Moloch manifests out of cold energy to land on top of a snowy cliff. Moloch then forcefully breathes a stream of snow at the targets.

Moloch is among Zagan (Venus), Megaera (Mars), and Flora (Jupiter) as a summon that is useful as an “alternative” summon for more powerful “traditional” summons. In The Lost Age however, once Piers, the Adept with the Psynergy means to reach Moloch, joins up, and provided the player has been careful to acquire all findable Djinn up to this point, the party can have a maximum of five Mercury Djinn by the time Moloch is acquired, so the powerful Boreas summon sequence may already have been used by the player for a while beforehand. Since Boreas does 2.4 times the amount of damage as Moloch, Moloch is already considered outclassed.

However, two of the five Mercury Djinn that can be acquired are encountered in not-so-obvious areas of the overworld map, so more often than not a first-time player without a walkthrough handy will only have three Djinn (enough to summon Neptune) when they acquire Moloch. In this case, Moloch is considered a superior alternative to Neptune because it can do comparable damage while drastically lowering the agility rating of all foes. Although it is the strongest of the four “basic summons” of The Lost Age and Dark Dawn, Moloch will quickly be outclassed by later summons.

In ancient texts, there are many different interpretations of Moloch but the origins of such a deity are unknown. It is believed that Moloch was either the name of a god or a particular kind of sacrifice practiced by Phoenicans and other North African cultures. This particular sacrifice was young children being thrown into a gigantic fiery oven and cremated, which is actually directly opposite of the elemental association he has in Golden Sun. The Mesopotamians worshiped Moloch as Ba'al, the Moon God, whilst medieval European demonology saw Moloch as a Prince of Hell, due to his association with the fiery sacrifice. Moloch is also one of the Fallen Angels in John Milton's Paradise Lost, and is the Angel who openly advocates a revival of the war against God immediately during the Fallen Angels' conference in Pandaemonium, the capital city of Hell. However, he could also be a representation of the Yeti of Asia, specifically Russia.

Retrieved from "https://goldensun.fandom.com/wiki/Moloch?oldid=42601"
Community content is available under CC-BY-SA unless otherwise noted.