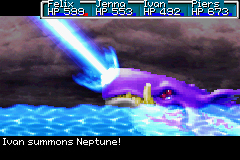 "An incarnation of the sea king."

Neptune is a Summon sequence of the Mercury element. When three Djinn of the Mercury Element are on standby, the Neptune Summon sequence can be activated. It resembles a titanic purple whale, with two pairs of red eyes and beige tusks, surface from an ocean and launch a Mercury beam attack with its frontal snout. This then assaults the enemy party in the form of downpours of water resembling waterfalls.

Neptune has a base Mercury power of 120 and also does additional damage equivalent to 9% of the enemy’s maximum HP. Neptune is the first truly useful Mercury summon sequence. It is twice as powerful as Nereid but uses only 1.5 times the amount of Djinn on standby. However, there is no boss fight in Golden Sun where it can be used effectively, particularly because the Boreas summon sequence can be attained shortly after Neptune can.

An image of Neptune modeled to resemble its original GBA incarnation was posted by IGN at E3 2010, confirming its inclusion in the game as one of its Mercury summon sequences. However, since then, Neptune has appeared sporting a different appearance (pictured): it now has darker, pale purple skin, a yellow horn on its head, and sharp beige protrusions adorning its sides above its eyes. Otherwise, its method of appearance and attacking the enemy force is the same as in the GBA games.

Neptune in Roman mythology was the god of the sea. His Greek equivalent was the god Poseidon.

In the Japanese version, the summon is known as Wodan, a Anglo-Saxon deity related to the Norse God Odin and the Roman god Mercury.

Neptune as it appeared in a beta of Golden Sun: Dark Dawn.
Add a photo to this gallery
Retrieved from "https://goldensun.fandom.com/wiki/Neptune?oldid=39672"
Community content is available under CC-BY-SA unless otherwise noted.