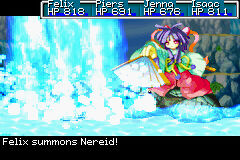 "Princess of the sea spirits."

Nereid is a Summon sequence of the Mercury element. When two Djinn of the Mercury Element are on standby, the Nereid Summon sequence can be activated. It resembles a purple-haired girl, in Japanese clothing and holding fans, arrive riding a giant tortoise and summoning an enormous water spout to engulf the enemy party.

In Dark Dawn, Nereid takes the form of a woman riding a blue horse through the water. She brandishes a pink trident above her head which causes tidal waves to crash over the foes.

The Nereids were the fifty sea nymph daughters of Nereus and Doris in Greek mythology. They often accompany Poseidon and are friendly towards sailors braving storms. They are also often associated with the Mediterranean Sea.

Nereid full sequence
Add a photo to this gallery
Retrieved from "https://goldensun.fandom.com/wiki/Nereid?oldid=34617"
Community content is available under CC-BY-SA unless otherwise noted.