Planet Diver and Planetary are related Mars Psynergies featured throughout the Golden Sun series that are functionally identical, but have different levels of power. They are among the strongest offensive Psynergies in the series.

Planet Diver and Planetary are offensive, single-target Psynergies that are Attack-dependent, meaning characters with higher Attack ratings will deal more damage with these attacks. In addition, the caster's Mars Power and the target's Defense and Mars Resistance all factor into the damage dealt. 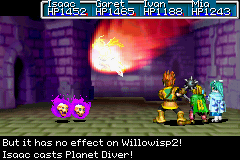 Planet Diver is described as "leap skyward and lunge onto a foe". The user leaps in to the sky and using gravity comes down on the target and attacks them. It is available to the Brute class series. Due to how powerful it is, it is extremely useful against any enemy including Saturos and later Menardi. It costs 7 PP to use and strikes the target with Mars power equal to the user's own attack power with 36 base Attack added. 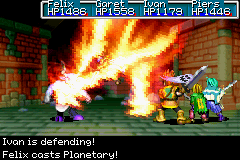 In Golden Sun: The Lost Age, after reaching the Berserker class, Planet Diver is replaced by the more powerful (and more expensive) Planetary. Planetary is described as "strike a foe with fire from the heaven". It is almost the same as Planet Diver with the only difference being that instead of looking like a meteorite coming down, the user takes on the form of a giant dragon head coming down. Despite being expensive, its pure power makes it a worthy option for single target Psynergy in the late game. Planetary costs 19 PP to use and strikes the target with Mars power equal to the user's own attack power with 98 base Attack added.

Planet Diver's visual effects show the user leaping up into the sky. The user is enveloped in a red aura as they come down and physically attack the enemy.

Planetary is similar in appearance to its predecessor. In The Lost Age, Planetary has the user jump up, and be enveloped in a firey aura shaped like a dragon's head before attacking the target. Dark Dawn's visual is similar, but adds a small firey explosion that goes off as the user leaps up.

Planet Diver's attack takes this base damage value and uses it in the following equation:

To word this in prose, Planet Diver and Planetary take the base damage of the user's normal physical attack, add a set amount of bonus damage to that, and then this result is modified by how much higher or lower the user's Mars Power is than the target's Mars Resistance. The difference between the user's Mars Power and the target's Mars Resistance is divided by 400, then 1 is added to this, resulting in what can be called the "elemental damage multiplier". This number is what the Psynergies' damage is multiplied by.

For example, if an Adept with an Attack rating of 300 and a Mars Power of 150 casts Planet Diver on a monster with a defense of 100 and a Mars Resistance of 50:

Therefore, a Planet Diver cast under these circumstances would deal approximately 170 points of damage.

It should be noted that Planetary is not introduced until The Lost Age, so in the original Golden Sun, even if they reach the Berserker class, Isaac and Garet will only be able to use Planet Diver.

General: Planet Diver's damage output is higher than other elemental physical attack Psynergies like Ragnarok and Heat Wave, due to the combination of the high added damage combined with the Brute class's higher attack as compared to other classes. Planet Diver is roughly on-par with a mid-game Unleash (with the main difference of costing Psynergy Points instead of activating at random) and is more valuable the earlier it is acquired. Even in the middle and late stages of a game, Planet Diver may be preferred over Unleashes due to its reliability. Planetary, by comparison, may not be as practical as Planet Diver: Despite the increased damage output, Planetary's high PP cost greatly reduces the number of times it can be cast, especially considering the Brute class's low PP pool. However, unlike Ragnarok and Odyssey, Planet Diver/Planetary can be distributed among many Adepts, 2 in Golden Sun, 4 in The Lost Age, and 3 in Dark Dawn. Thus, PP can be preserved by putting multiple party members in the Brute class, and splitting uses of Planet Diver/Planetary amongst the battlers.

Vs. Djinn: Many, though not all, offensive Djinn use a damage multiplier instead of a fixed damage increase, in addition to the Power - Resistance multiplier. As a result, these Djinn have the potential to be much stronger than Planet Diver and Planetary, especially in the later stages of a game when the Adept in question has a higher Attack rating. However, unleashing Djinn in battle places them in Standby, resulting in two main disadvantages. First, Djinn must be Set to affect a character's class; unleashing a Djinni may result in lower statistics across the board, including Attack and Power, reducing the damage dealt by subsequent attacks. Second, a Djinni's effect cannot be used again until that Djinni is re-Set, which means either wasting a turn manually Setting the Djinni or using it to perform a Summon, after which the Djinn used must spend several turns Recovering before they automatically Set themselves. Either way, offensive Djinn cannot be repeatedly used as easily as Psynergy, making Planet Diver and Planetary more feasible for long-term combat. Alternatively, players may choose to combine both approaches: Unleash several offensive Djinn, perform a Summon, then use Planet Diver and/or Planetary to continue dealing damage while the Djinn are in Recovery.

Golden Sun: Planet Diver will generally be learned by the time the player must battle Saturos at Mercury Lighthouse. While useful on the Lighthouse's monsters, it has less use in the boss battle, due to Saturos's high Mars Resistance. However, Planet Diver's overall power will still ensure that it does decent damage. Afterwards, it is useful against a number of mid-game bosses, including the Hydros Statue and the Kraken, but becomes less so in the deserts, where most of the enemies are Mars-based. If Isaac or Garet is put in the Swordsman class series after acquiring Mia, the other will be able to use their Djinn to enter the Brute class series - combined, Cutting Edge and Planet Diver are effective against the vast majority of the game's bosses.

Golden Sun: The Lost Age: There are fewer Mars-weak bosses in the game, the Aqua Hydra and Poseidon being the main two. Overall, the series will see less use (but very potent when sailing the seas), but Planet Diver can be of vital use in the previously mentioned boss battles, as Planet Diver and Planetary are the only Mars-based physical elemental attacks available until Garet joins the party late in the game. Planetary, while powerful, will see less use, due to its high PP cost combined with the Brute's low PP and the high number of Mars-resistant monsters.

Golden Sun: Dark Dawn: In general, changes to the Unleash system make the series a more reliable form of damage, and among the strongest moves early on. Planet Diver is a useful option for Matthew and Tyrell against both the monsters of Barai Temple and against the Ice Queen of the Harapa Ruins. Planetary will be available in the later stages of the Morgal region, and is a useful option against Blados. Both are also a good weapon against the random encounters of the Great Eastern Sea. In addition, new methods of PP restoration reduce the impact to any Brute class Adept's PP pool.