Plasma, Shine Plasma, and Spark Plasma make up one of the strongest and most popular groups of Jupiter Psynergy available. It receives heavy usage throughout the series, as each level of the technique is very powerful for when it learned and retains much of that power for a long while afterwards. The Plasma Psynergy series is very similar to the Thunderclap Psynergy series used by the Ninja class series, which is also the (aforementioned) strongest of the Jupiter series. 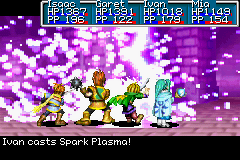 Plasma, Shine Plasma, and Spark Plasma are ranged, offensive Psynergies. Each Psynergy has a specific base power that is modified based on the caster's Jupiter Power and the target's Jupiter Resistance.

Plasma: GS, TLA, and DD: "Attack with a barrage of bolts." In all games, it appears as a single, wide bolt of purplish-white lightning firing down on the enemy before exploding on impact with the ground, though the bolt is slightly smaller in Golden Sun: Dark Dawn. Plasma is learned at Level 8, hits three targets with Jupiter power of 45, and costs 8 PP to perform.

Shine Plasma: GS and TLA: "Attack with a barrage of bolts"; DD: "Strike with a concentrated flurry of bolts." In the GBA games, it takes on the form of three individual Plasma attacks striking in succession. In Golden Sun: Dark Dawn, it appears as a single wide strike of lightning, followed by an electrical orb sending out rays of lightning which shakes the enemy party violently. Shine Plasma is learned at Level 26, hits five targets with Jupiter power of 100, and costs 18 PP to perform.

Spark Plasma: GS and TLA: "Attack with a barrage of bolts"; DD: "Strike with a coruscating surge of energy." In the GBA games, it appears as a barrage of normal Plasma attacks being volleyed without ceasing into the targeted enemies. In Golden Sun: Dark Dawn, it appears as Shine Plasma does, the orb exploding afterwards in a flash of white light. Spark Plasma is learned at Level 50 for the Wind Seer, Hermit, and Pilgrim Class series, and Level 46 for the White Mage Class series. It hits seven targets for Jupiter power of 180, and costs a tremendous 37 PP to perform.

The visual effects of each stage of the series is generally similar but varies slightly depending on the specific stage. In Golden Sun and Golden Sun: The Lost Age, the series appears as purple-white bolts of lighting firing down on the enemies. The number of bolts increases for each successive stage: 1 for Plasma, 3 for Shine Plasma, and multiple bolts for Spark Plasma. In Golden Sun: Dark Dawn, each stage is given a unique visual effect. Plasma is shown as a one purple-white bolt of lightning, similar to the GBA version. Shine Plasma appears as a larger bolt that fires down. It then forms a sparking ball of energy that disappears. Spark Plasma is similar to Shine Plasma, but the sparking ball of energy explodes in a purple-white blast.

Elemental Power attacks such as the Plasma series use a set base power as the base damage to be modified. For example, the base power of Spark Plasma is 180. Thus an unmodified Spark Plasma would do around 180 points of damage.

Whirlwind's attack takes this base damage value and uses it in the following equation:

General: The second-strongest Jupiter Power-based series, (the title of strongest series goes to the Thunderclap Psynergy series), the Plasma series is one of the most useful Jupiter-based offenses for Adepts that focus one Psynergy-based Attacks. Good availability, combined with high power, means than it will be commonly used no matter the party setup. The high power of the series means that the power of each stage is retained for a significant portion of time. While the Thunderclap series is stronger, it is limited to the Ninja class series; additionally, the higher Jupiter Power of the Wind Seer class series helps to make up for the difference in power.

Golden Sun and Golden Sun: The Lost Age: For the Wind Seers, Whirlwind and Ray will see more use until Spark Plasma (as they're otherwise never too far from a Plasma upgrade). Once there, Plasma will be the best offense available to Ivan and Sheba. For the other classes, Plasma will generally fill the role of Whirlwind/Ray instead, and Spark Plasma will often be the best Jupiter Psynergy at one's disposal.

Golden Sun: Dark Dawn: With Ray being replaced by Fresh Breeze, Plasma will be all Karis has other than Whirlwind, so it'll be seen a lot more often even before Spark. As several enemies are weak to Jupiter, it can be a viable weapon for certain boss battles.