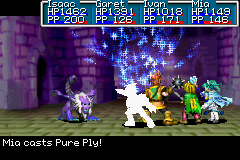 Ply, Ply Well and Pure Ply are a series of Mercury-based Support-class Psynergy featured throughout the Golden Sun series. It is the most powerful single-target healing series of Psynergy in the game, and is accessible usually upon recruiting a Mercury Adept into the player's party.

The Ply Psynergies restore a set amount of Hit Points to a single Adept that has not fallen. When used during battle, only members of the actively battling party can be targeted. The amount of HP recovered depends on the Mercury Power of the caster, as well as the actually Psynergy being used.

Ply: "Restore 100 HP with faith's power.": This spell costs 4 Psynergy Points, restores 100 HP, and affects one target ally. It is available at Level 1 for Swordsman (Venus), Swordsman (Mars), Dragoon, and Water Seer, and at Level 2 for Mariner.

Ply Well: "Restore 200 HP with faith's power.": This spell costs 8 Psynergy points, restores 200 HP, and affects one target ally. It is available at Level 16 for Swordsman (Venus), Swordsman (Mars), Dragoon, and Water Seer, and at Level 17 for Mariner.

Pure Ply: "Restore 1,000 HP with faith's power." This spell costs 12 Psynergy Points, restores 1,000 HP, and affects one target ally. It is available at Level 34 for Swordsman (Venus), Swordsman (Mars), Dragoon, and Water Seer, and at Level 35 for Mariner.

The visual effects vary from one stage of the series to another. In Golden Sun and Golden Sun: The Lost Age, blue sparks of energy spiral from the sky into the targeted Adept. The number of sparks increases with each successive stage. Golden Sun: Dark Dawn also shows blue sparks of energy spiraling down. While the sparks enter the Adept, Ply Well also shows 3 beams of light shining from the sky, one larger beam centered on the Adept, and two smaller ones in front of the Adept. Similarly, Pure Ply shows one large beam of light on the Adept, and 4 smaller beams arranged in an arc in front of the Adept.

As previously stated, the exact strength of the Ply Psynergies depend on the caster's Mercury Power. To be specific, the outcome can be represented with the following formula:

Ply as a Utility Psynergy[]

Ply can be used outside of battle, usually to heal injured party members. However, Ply has another purpose: it can (and must) be used to activate certain events in Mercury Lighthouse:

When Ply is used in this manner, a fairy appears and sprinkles some "fairy dust" in the area, after which one of the mentioned effects will activate. This effect of Ply can only be used in the above locations or by setting it to a shortcut.

The Ply Psynergies are available to all three Mercury-based mono-elemental classes, the Mariner class series, the Water Seer class series, and the Aqua Squire class series. In addition, the Ply series is also available to the Venus and Mars based Swordsman classes, specifically the stages of Defender and above as well as the Dragoon class series. Non-Mercury Adepts usually require a varying number of Set Mercury Djinn to access the series; the Swordsman classes specifically require at least 2 Set Mercury Djinn to access Ply.

General: The Ply Psynergies are the strongest of the three single target healing series, but are learned slightly later than the other two. Helping their usage is the fact that they are always available to the main playable Mercury Adepts of the respective game. This makes the playable Mercury Adept(s) the main source of late-game healing in any game. However, the Ply series is often overlooked by the Wish series, which is not only available to more classes than Ply, but has the advantage of healing multiple targets. Despite this, Ply remains an excellent tool for patching up Adepts in the later portions of the game, specifically because of its high HP recovery compared with the lower PP cost.

Golden Sun: The Ply series becomes available once Mia joins the party at Mercury Lighthouse. Before hand, the main source of healing lies in the Cure Psynergy series available to Isaac. Even afterwards, the limited PP at this point means that Cure will still be seen in combination with Ply. Once Ply Well and Wish are learned however, they will become the main source of healing.

Golden Sun: The Lost Age: Due to the earlier availability of Mercury Djinn, Ply can be accessed much earlier should the player take advantage of class changes. Otherwise, Cure remains the only source of healing until Piers joins the party in Kibombo. Should the player keep the party in their base classes, the Ply series is the only Mercury-based heal. While Jenna learns the Mars-based mass heal, the Aura Psynergy series, Ply will still be needed for situations where Jenna is needed as an attacker.

Golden Sun: Dark Dawn: Ply first becomes accessible once Rief joins the party. However, the player will gain access to the multi-target Fresh Breeze before battling the Dim Dragon, allowing for more efficient healing. However, Ply is the more potent heal, and can be used for patching up a single Adept fully, where the weaker Fresh Breeze may not. Amiti will also know Ply once he joins. Once the player has gained 4 Mercury Djinn, Wish quickly becomes the main source of healing, though Ply will still see use.