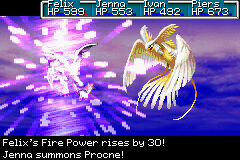 "A goddess in bird form."

Procne has a base Jupiter power of 120 and also does additional damage equivalent to 9% of the enemy’s maximum HP. Procne is the first truly useful Jupiter summon sequence. It is twice as powerful as Atalanta but uses only 1.5 times the amount of Djinn on standby. It can be very effective in the boss fight against the Killer Ape in Mogall Forest.

An image of Golden Sun: Dark Dawn originating from E3 2010 shows an avian being similar to Procne in many ways in terms of physical body and head structure, but with a drastically different color scheme. Flying along with Procne are two little birds: a swallow and a nightingale. While the huge Procne creates the winds that levitate the enemies into the sky, the birds fly in circles, generating the energy that will be fired as beams.

It is possible that Procne's new color scheme could be a reference to the myth in which the summon is based: the mythical Procne was transformed into a swallow, while her sister Philomela was turned into a nightingale. The appearance of this two birds in the new summoning sequence may be a further reference to the myth.

In Greek mythology, Procne was a daughter of Pandion and Zeuxippe, rulers of Athens. She was turned into a bird by the Olympian gods after her husband Tereus' attempt to kill Procne and her sister Philomela.

Official art depicting the Procne summon
Add a photo to this gallery
Retrieved from "https://goldensun.fandom.com/wiki/Procne?oldid=37453"
Community content is available under CC-BY-SA unless otherwise noted.