Psy Drain is an unique Jupiter class Psynergy found in both Golden Sun and Golden Sun: The Lost Age. It is unique because, unlike every other Psynergy, Psy Drain costs 0 Psynergy Points, not surprising since it is used to restore PP. It has a range of 1. The following classes have access to this Psynergy: 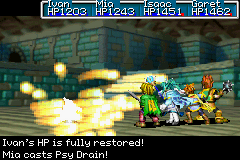 While most of the Classes learn Psy Drain at level 39, the Ranger Class and the Pilgrim learn it slightly later at level 41. The Medium, on the other hand, learns it at a lower level than usual, 36.

Oddly enough, the icon for this Psynergy remains unchanged from the Japanese version, where 'Psynergy' is simply called 'Energy'. Hence EP rather than PP.

Although seemingly a very good Psynergy, several things detract from Psy Drain. First is the high level that an Adept learns it at, by the time many of them get this their pool of PP is generally large and should not be running out all that often. Secondly most of these are only available to the mage type Adepts, giving them an even larger pool of PP than the warrior Adepts who could use this more. Finally the Psynergy doesn’t always work and the amount of PP that it nets you is not that much, although the fact that it also drains PP from the foe is a slight advantage. To make a long story short, you are better off using alternate PP-restoring methods, such as Psy Crystals or equipment like the Psychic Circlet.

Retrieved from "https://goldensun.fandom.com/wiki/Psy_Drain?oldid=29386"
Community content is available under CC-BY-SA unless otherwise noted.