Punji, Punji Trap, and Punji Strike are a series of Venus Psynergies featured throughout the Golden Sun series. The series seems to be similar in nature to the Thorn Psynergy series. 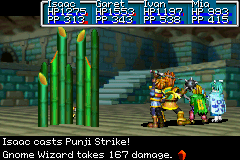 Punji, Punji Trap, and Punji Strike are offensive, ranged Psynergies. The overall power of each stage is determined by comparing the user's Venus Power and the target's Venus Resistance, and multiplying the resultant ratio by the base power of the Psynergy being used.

Punji: "Attack with a bamboo weapon.": This costs 7 Psynergy Points, has a base power of 45 and has a range of three target targets. A few stalks of bamboo erupt from the ground and through the foe. It is available at level 4.

Punji Trap: "Attack with a bamboo weapon.": This costs 13 Psynergy Points, has a base power of 85, and has a range of three targets. A group of bamboo stalks erupt from the ground and through the foes for a short time. It is available at level 15.

Punji Strike: "Attack with a bamboo weapon.": This costs 24 Psynergy Points, has a base power of 150, and has a range of five targets. A large amount of bamboo stalks erupt from the ground and through the foes for an extended time. It is available at level 36.

Visually, the Punji series features a group of bamboo shoots quickly sprouting up beneath the targets. The number and size of the bamboo shoots increases with each successive stage. Its unique visuals in Golden Sun and The Lost Age are in contrast to the other ranged series of the Ninja class, which shared visuals with other Psynergy series. In Dark Dawn, the series was preceded by a unique casting animation, which featured golden symbols emerging from a similarly colored scroll that formed around the caster.

Punji Strike's attack takes this base damage value and uses it in the following equation:

For example, if an Adept with a Venus Power of 150 casts Punji Strike on a monster with a Venus Resistance of 50:

The Punji series is the only Power-based Venus series available to the Ninja class and also is the second strongest Power-based series available to the Ninja class, after the Thunderclap Psynergy series. The series is available fairly early on, with Punji Strike available at Level 36, and is fairly cheap in terms of Psynergy cost. As a Venus-based offense, it can be outperformed by the Attack-based Annihilation, but is still useful for hitting multiple targets.

The names of the series appear to come from the Punji Stick, a style of trap that used upright spikes of wood or bamboo. The spikes would be hidden in areas commonly passed through by enemies, and were designed to wound rather than kill.