Quick Strike is a Jupiter Psynergy featured throughout the Golden Sun series. It is one of the most powerful Psynergies in the series and, up through Golden Sun: Dark Dawn, is only available to those in the Samurai class series. 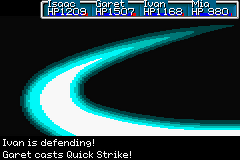 Quick Strike is an offensive, single-target Psynergy that is Attack-dependent, meaning characters with higher Attack ratings will deal more damage with these attacks. In addition, the caster's Jupiter Power and the target's Defense and Jupiter Resistance all factor into the damage dealt.

Contrary to what the in-game description indicates, there is nothing about Quick Strike that is executed "faster" than any other Psynergy spell. It does not act first regardless of the user's agility in a given turn, unlike the Venus Djinni Granite, for example.

Visually, Quick Strike in Golden Sun and Golden Sun: The Lost Age resembles the user quickly leaping toward the target as though dealing a normal physical attack, but then the screen turns briefly black and a large, white-blue swath representing a strike streaks across the screen on impact. In Golden Sun: Dark Dawn, the user summons the darkness first, and then visually fades out from their current position. At the same time they reappear in front of the target in a pose suggesting they have already struck the enemy. The enemy is hit at the same time by a large bluish swath, which represents a strike, streaking across the screen through the enemy's position.

As previously stated, there are several factors determining the damage dealt by Psynergies like Quick Strike. The exact damage calculation formula for these attacks can be represented with the following two equations:

This formula is identical to the formula used to determine the damage dealt by standard physical attacks. In other words, base damage is half of the difference between the caster's Attack and the target's Defense. If this number falls below zero, it is automatically reset to zero.

This is the base damage. Quick Strike then uses this value for another equation:

Power and Resistance are used to determine the multiplier applied to this new base damage. The target's Resistance is subtracted from the caster's Power, the difference is divided by 100, and the result is added to 1 before being multiplied by the base damage. As a result, the final damage dealt by these attacks can, theoretically, vary from roughly 50% to 150% of a normal physical attack.

Therefore, a Quick Strike cast under these circumstances would deal approximately 450 points of damage.

Quick Strike is unique to the Samurai class series, meaning it can be used by the Venus Adepts Isaac, Felix, and Matthew, and the Mars Adepts Garet, Jenna, Tyrell, and Eoleo. (Note that Himi cannot use it because she is unable to attain this class series, for some unknown reason.) It takes large and specific amounts of Venus, Mars, and Jupiter Djinn to place these Adepts in this class. Quick Strike is learned at level 40.

General: Quick Strike is one of the strongest, most reliable, and most practical forms of offense in any of the games. Unlike most elemental physical attack Psynergies like Ragnarok and Heat Wave, which add a set amount of damage as a bonus, Quick Strike applies a multiplier to the resultant damage, and it is an enormously powerful multiplier of x1.8, which nearly doubles the resultant damage. By its nature, it is more sensitive to how much Defense the target has, so its power will be elevated to great heights depending on how many measures are taken to increase the user's Attack Power - such as equipping a high-attack-power weapon like the Darksword and being boosted by an effect like the Impact Psynergy. It is extremely well-valued at a cost of 12 Psynergy Points and is stronger than almost any other Psynergy in the series. An Adept in the Samurai class series, provided they are at least at level 40, will most likely adopt this Psynergy as their main means of piling on damage.

Quick Strike is a Psynergy that is like many offensive Djinn because of how they use a damage multiplier instead of a fixed damage increase, in addition to the Power - Resistance multiplier. However, Quick Strike can be said to be far superior to unleashing a Djinni, because most Djinn have damage multipliers somewhere below x1.8, and there is the issue of what happens with a Djinni when it is unleashed in battle. As Djinn must be Set to affect a character's class, unleashing a Djinni may result in lower statistics across the board, including Attack and Power, reducing the damage dealt by subsequent attacks. Second, a Djinni's effect cannot be used again until that Djinni is re-Set, which means either wasting a turn manually Setting the Djinni or using it to perform a Summon, after which the Djinn used must spend several turns Recovering before they automatically Set themselves. Either way, offensive Djinn cannot be repeatedly used as easily as Psynergy, making Quick Strike much more feasible for long-term combat. Alternatively, players may choose to combine both approaches: Unleash several offensive Djinn, perform a Summon, then use Quick Strike to continue dealing damage while the Djinn are in Recovery.

Golden Sun: Quick Strike is practically a "hidden" Psynergy in the game because it is learned all the way at level 40, when a typical end-game party that defeats the final boss is not even level 30. Both the final boss and the optional boss Deadbeard become noticeably easier to handle by a party ten levels above 30 to begin with, and if a level 40-or-above Adept enters the Samurai class series, Quick Strike will prove itself immensely powerful and useful and make both these battles go by much more quickly.

Golden Sun: The Lost Age: The party is much more likely to get past level 40 by the end of this game, and once this point of the game is reached the party will have found weapons that increase Attack by much higher amounts, and enough Djinn can be collected that a Samurai can instead be in the even stronger Ronin class. These give Quick Strike plenty of opportunity to hit even more powerfully than before, and it is excellent to use against the final boss and Star Magician.

Golden Sun: Dark Dawn: With the faster XP gain rates in this game, the party is very likely to be at level 40 once Apollo Sanctum is reached near the end of the game, where Quick Strike will be extremely useful against the final boss. If the party is not quite at level 40 yet, fighting Tua Warriors will reach that point quickly. It is also easier for Quick Strike's damage output to be maximized; Himi, though unable to use Quick Strike because she cannot be in the Samurai class series for an unknown reason, may use Weapon Grace while in her default class series to raise a selected Adept's Attack to the highest stage. Even without these, the value of Quick Strike is greater in Dark Dawn because one of the party's main forms of dealing damage, Unleashing with weapons, has become more randomized due to changes in Unleash mechanics - most weapons have several Unleashes that are randomly chosen from each time an Unleash occurs, and the more useful Unleashes will not always be chosen. Quick Strike, on the other hand, has a damage multiplier higher than many Unleashes, and it can be relied on to deal a huge amount of damage each time you select it.

Retrieved from "https://goldensun.fandom.com/wiki/Quick_Strike?oldid=43052"
Community content is available under CC-BY-SA unless otherwise noted.