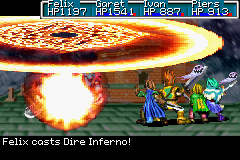 Raging Heat, Fiery Abyss, and Dire Inferno are offensive, ranged Psynergies. The total amount of damage is determined by comparing the user's Mars Power to the target's Mars Resistance and using this value to modify the base power of the particular Psynergy.

Raging Heat: "Call forth the fires of the pit.": This costs 9 Psynergy Points, has a base power of 45, and has a range of three targets. It appears as an ornate shape that has a circle in the middle. It then drops a fireball onto the enemy party which then explodes. It is available at level 9.

Fiery Abyss: "Call forth the fires of the pit.": This costs 18 Psynergy Points, has a base power of 90, and has a range of five targets. It appears as a larger ornate shape that has a circle in the middle. It then drops an even larger fireball onto the enemy party which then creates a larger explosion. It is available at level 22.

Dire Inferno: "Call forth the fires of the pit.": This costs 32 Psynergy Points, has a base power of 200, and has a range of seven targets. It appears as a massive ornate shape that has a circle in the middle. It then drops an enormous fireball onto the enemy party which then creates a huge explosion. It is available at level 53.

Visually, each stage of the series features a large ornate seal forming above the enemies. A large fireball then drops onto the opponents. In Dark Dawn, the color of the seal changes progressively with each stage, from an orange color to an intense red. In both cases, the size of the fireball increases with each stage.

For example, if an Adept with a Mars Power of 150 casts Dire Inferno on a monster with a Mars Resistance of 50:

Therefore, a Dire Inferno cast under these circumstances would deal approximately 300 points of damage to the targeted enemy. Since Dire Inferno is a ranged Psynergy, adjacent targets take a percentage of the total damage, with the percentage decreasing as distance from the main target increases.

Golden Sun: The Lost Age: The Raging Heat series has the advantage of being available to any Adept, giving the player a nice variety of potential users. The series will be used alongside the single-target Call series in most situations, with Raging Heat softening up groups and Call finishing off stragglers. Big Bang Gloves can be equipped to increase the power of the series, should the player desire.

Golden Sun: Dark Dawn: The series is Himi's strongest ranged Psynergy in her Curse Mage class and the class's only offensive Mars series. The class's Djinn set up means that she will have higher Mars Power than Adepts in The Lost Age, making it more powerful. The series is great for softening up groups of targets, and can be used along side Himi's powerful single-target series, the Undead Curse Psynergies to take out large groups. It is especially good against the monsters of the Grave Eclipse, all of whom are susceptible to Mars to a degree.