Ragnarok and Odyssey are a pair of Venus Psynergies featured throughout the Golden Sun series that are functionally identical but have different levels of power. They are among the strongest offensive Psynergies in the series and, up through Golden Sun: Dark Dawn, are only available to party leaders.

Ragnarok and Odyssey are offensive, single-target Psynergies that are Attack-dependent, meaning characters with higher Attack ratings will deal more damage with these attacks. In addition, the caster's Venus Power and the target's Defense and Venus Resistance all factor into the damage dealt. 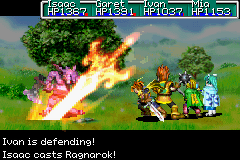 Ragnarok is available at Lv. 13 to the Squire, Knight, and Gallant classes (the Lord class also has it in the first Golden Sun). It is described as a "strike with a massive sword", and is the most powerful of the original single-target Psynergies. Ragnarok is often obtained just prior to the first battle with Saturos, and as such, it is considered extremely helpful in the battle. It costs 7 PP to use and strikes the target with an attack equal to the user's standard physical attack, with 35 additional points of damage added and then the resulting damage either increased further or decreased depending on how the user's Venus power compares to the target's Venus resistance. 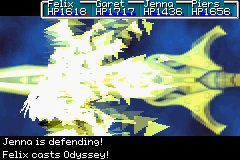 In Golden Sun: The Lost Age, after reaching the Lord Class, Ragnarok is replaced completely by the far more powerful (and expensive) Odyssey. Odyssey, which is described as "pierc[ing] a foe with a colossal sword", appears as the caster piercing his target with two small, rapier-esque blades before slamming into them with the aforementioned "colossal sword". Since it can be obtained before the player fights Poseidon, and thus is usable for most of all of the middle and late game, Odyssey is often used in favor of Ragnarok, although some players think its high cost of PP, when compared to the relatively low amount of PP that Isaac and Felix possess, make it not worth using. Odyssey costs 18 PP to use and strikes the target with an attack equal to the user's standard physical attack, with 95 additional points of damage added and then the resulting damage either increased further or decreased depending on how the user's Venus power compares to the target's Venus resistance.

Visually, Ragnarok resembles a large, glowing, semi-transparent orange sword that comes down on the target at an angle, crashing into the ground beneath. In Golden Sun and Golden Sun: The Lost Age, the blade simply explodes into a bunch of bright-orange energy orbs that fill the screen. As of Golden Sun: Dark Dawn, the blade instead creates a small fissure at the target's feet, where it remains lodged as the same orbs are released from the fissure. After a moment, the screen turns white.

Odyssey maintains Ragnarok's sword theme, but differs in the number and sizes of blades used. Odyssey begins by taking the caster and target to a dark blue realm where the target is pierced by multiple smaller swords. In The Lost Age, a pair of white blades come at diagonal angles from the right; as of Dark Dawn, four yellow blades come at diagonal angles from below. The caster then strikes the target in tandem with a colossal yellow sword - similar to the one used by Ragnarok - shattering the smaller blades and turning the screen white. In The Lost Age, the caster is enveloped in the image of the sword and strikes the target from the right; as of Dark Dawn, the caster leaps into the air as if to strike the target from above, only for the sword to descend on the target.

Ragnarok's attack takes this base damage value and uses it in the following equation:

To word this in prose, Ragnarok and Odyssey take the base damage of the user's normal physical attack, add a set amount of bonus damage to that, and then this result is modified by how much higher or lower the user's Venus Power is than the target's Venus Resistance. The difference between the user's Venus Power and the target's Venus Resistance is divided by 400, then 1 is added to this, resulting in what can be called the "elemental damage multiplier". This number is what the Psynergies' damage is multiplied by.

For example, if an Adept with an Attack rating of 300 and a Venus Power of 150 casts Ragnarok on a monster with a defense of 100 and a Venus Resistance of 50:

Therefore, a Ragnarok cast under these circumstances would deal approximately 168 points of damage.

Ragnarok and Odyssey are unique to the Squire class series, meaning only Isaac, Felix, and Matthew can cast them, and only if they have no Djinn except Venus Djinn set.

It should be noted that Odyssey is not introduced until The Lost Age, so in the original Golden Sun, even if he reaches the Lord class, Isaac will only be able to use Ragnarok.

General: Ragnarok's damage output is roughly the same as other elemental physical attack Psynergies like Heat Wave and Diamond Dust, but in practice, Ragnarok appears to deal more damage due to the Squire class series's higher Attack multipliers. Ragnarok is roughly on-par with a mid-game Unleash (with the main difference of costing Psynergy Points instead of activating at random) and is more valuable the earlier it is acquired. Even in the middle and late stages of a game, Ragnarok may be preferred over Unleashes due to its reliability. Odyssey, by comparison, may not be as practical as Ragnarok: Despite the increased damage output, Odyssey's high PP cost greatly reduces the number of times it can be cast, especially considering the Squire classes' low PP pool.

Vs. Djinn: Many, though not all, offensive Djinn use a damage multiplier instead of a fixed damage increase, in addition to the Power - Resistance multiplier. As a result, these Djinn have the potential to be much stronger than Ragnarok and Odyssey, especially in the later stages of a game when the Adept in question has a higher Attack rating. However, unleashing Djinn in battle places them in Standby, resulting in two main disadvantages. First, Djinn must be Set to affect a character's class; unleashing a Djinni may result in lower stats across the board, including Attack and Power, reducing the damage dealt by subsequent attacks. Second, a Djinni's effect cannot be used again until that Djinni is re-Set, which means either wasting a turn manually Setting the Djinni or using it to perform a Summon, after which the Djinn used must spend several turns Recovering before they automatically Set themselves. Either way, offensive Djinn cannot be repeatedly used as easily as Psynergy, making Ragnarok and Odyssey more feasible for long-term combat. Alternatively, players may choose to combine both approaches: Unleash several offensive Djinn, perform a Summon, then use Ragnarok and/or Odyssey to continue dealing damage while the Djinn are in Recovery.

Golden Sun: Since Odyssey is not introduced until The Lost Age, players only have access to Ragnarok in the original Golden Sun, despite Isaac having access to the Lord class. Of course, considering Odyssey's high PP cost, this may be a blessing in disguise. Regardless, Ragnarok is especially useful during the first battle with Saturos atop Mercury Lighthouse. By the end of the game, though, it has to compete with the Gaia Blade's Unleash, Titan Blade, which is effectively identical to Ragnarok but adds 70 damage instead of 35. While stronger, the unreliability of Unleashes mean Ragnarok is still a practical alternative.

Golden Sun: The Lost Age: Felix will likely learn Ragnarok in time for the battle with Briggs, during which it should prove quite useful. Also, enough Venus Djinn can be found in the Great Eastern Sea for Felix to access the Lord class prior to entering Lemuria, making Odyssey an effective, if expensive, attack to use against the Avimander and Poseidon. It may also prove useful against Moapa and his two Knights, but its practicality begins to fade by the end of the game. Several end-game weapons have Unleashes that may outright multiply the damage dealt; special mention must go to the Sol Blade's Unleash, Megiddo, which always triples damage when it activates. If combined with various unleash rate-boosting equipment, which can all-but guarantee Megiddo's success, one of the game's two Venus Adepts will have no need to waste PP on Odyssey. The other party leader may still find Odyssey useful, although there are other weapons that may also multiply damage. Since these weapons' multipliers aren't a sure-fire thing, it is up to individual players to decide if they want to gamble with Unleashes or spend some extra PP for a more reliable attack.

Golden Sun: Dark Dawn: Matthew may learn Ragnarok while exploring Ei-Jei, making it a useful weapon against the various bosses encountered in the region. Also, due to a poorly balanced distribution of Djinn, Matthew can quickly reach the Lord class and utilize Odyssey in the battles with Sludge and the Mountain Roc. Although its PP cost hasn't gone down any, Odyssey is a more practical choice than it was in The Lost Age, due primarily to changes to the Unleash system that further reduce the likelihood of scoring damage-multiplying Unleashes. In addition, new methods for recovering PP help cushion the blow Odyssey deals to Matthew's PP pool.

Ragnarok is the name given in Norse myth to the battle that will ultimately cause the end of the current world and the creation of the new. The Psynergy was likely given this name simply to exemplify its violent nature. Ragnorok is also a recurring name for certain powerful swords in the Final Fantasy RPG series, which may also be where the Psynergy's sword-shape and name combination stem from.

Odyssey is the name of an epic poem by Homer, deriving its name from its hero, Odysseus (Ulysses in Roman sources).