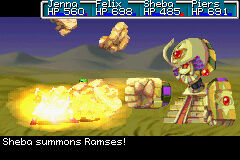 "Guardian of an immortal pharaoh."

Ramses is a Summon sequence of the Venus element. When two Djinn of the Venus Element are on standby, the Ramses Summon sequence can be activated. It resembles an animated monument styled as an Egyptain pharoah raining down boulders onto the enemy and then launching its right fist into them in an explosion.

The desert background seen in the Ramses summon sequence is unused anywhere else in the original Golden Sun. In The Lost Age, however, it is also used in overworld battles in the desert area in the northern part of the continent Hesperia.

Ramses reappears in Golden Sun: Dark Dawn. Its summoning conditions and effect remain the same as before, though its appearance and summon animation have been altered to feature Ramses bursting out from within a pyramid. This version of Ramses also features a gold faceplate that slides over its mummy-like face during the attack animation.

Ramses is the name of eleven Egyptian pharaohs of the 'New Kingdom' Period. The name literally translates as "Born of the Sun god Ra".

Piece of animation from the GSDS Ramses summon sequence
Add a photo to this gallery
Retrieved from "https://goldensun.fandom.com/wiki/Ramses?oldid=35485"
Community content is available under CC-BY-SA unless otherwise noted.