Ray, Storm Ray, and Destruct Ray are a series of offensive Jupiter Psynergy featured throughout the Golden Sun series. 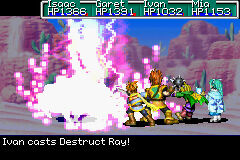 Ray, Storm Ray, and Destruct Ray are offensive, ranged Psynergies. The final amount of damage is determined by comparing the caster's Jupiter Power to the target's Jupiter Resistance and using the difference to modify the base power of the particular Psynergy in use.

Ray: “Attack with a magnetic storm.”: This costs 6 Psynergy Points, has a base power of 35, and has a range of three targets. An array of thin purple lightning thoroughly damages the enemies. It is available at level 4.

Storm Ray: “Attack with a magnetic storm.”: This costs 10 Psynergy Points, has a base power of 65, and has a range of three targets. An array of purple lightning thoroughly damages the enemies. It is available at level 14.

Destruct Ray: “Attack with a magnetic storm.”: This costs 21 Psynergy Points, has a base power of 150, and has a range of three targets. An array of thick purple lightning thoroughly damages the enemies. It is available at level 36.

Visually, the Ray series resembles a group of purple lighting bolts striking the targets. The number and size of the bolts increases with each successive member of the series.

Elemental Power attacks such as the Ray series use a set base power as the base damage to be modified. For example, the base power of Destruct Ray is 150. Thus an unmodified Destruct Ray would deal around 150 points of damage.

The Ray series' attack takes this base damage value and uses it in the following equation:

Therefore, the maximum amount of damage that a Destruct Ray cast under these circumstances would deal would be approximately 225 points of damage. Because each member of the Ray series is a ranged Psynergy, this maximum total would be applied only to the main target. All other enemies within range would receive a percentage of the total damage, with the percentage decreasing as distance from the main target increases.

Unlike many series, the availability of the Ray series varies significantly by game. In Golden Sun and Golden Sun: The Lost Age, this series is unique to the Wind Seer class series, a Jupiter-based mono-elemental class. In Golden Sun: Dark Dawn, the Wind Seer is incapable of using this series, instead gaining the Fresh Breeze Psynergy series. However, the Beastling class series, another Jupiter-based mono-elemental class has access to the Ray series. This means that only Ivan, Sheba, and Sveta have access to the Ray series, and only when each Adept has no Djinn or only Jupiter Djinn set to them. In all classes, Ray is learned at Level 4, Storm Ray at Level 14 and Destruct Ray at Level 36.

General: While by no means the most powerful Jupiter Psynergy available, it is one of the most efficient series, being cheap and learned early while retaining a decent amount of power. It is particularly useful as there are few instances in the series where there are more than three enemies.

Golden Sun and Golden Sun: The Lost Age: For both Ivan and Sheba, the Ray series is the weakest and cheapest offensive series available to them. Destruct Ray is fairly powerful when learned at Level 36. The series' cheap cost, combined with the large PP pool of the Wind Seer class, makes the Ray series useful for situations where Ivan or Sheba would need to conserve PP.

Golden Sun: Dark Dawn: The Ray series takes a middle point for Sveta, between the weaker Slash Psynergy series and the stronger Whirlwind Psynergy series. It remains fairly efficient, and will be the Psynergy of choice while exploring the Great Eastern Sea. Even when Tempest is learned, Destruct Ray still remains a viable option, given the comparisons in base power and PP cost.

Retrieved from "https://goldensun.fandom.com/wiki/Ray_Psynergy_series?oldid=42605"
Community content is available under CC-BY-SA unless otherwise noted.