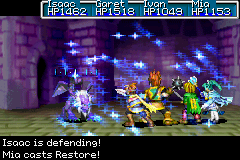 Restore is a Mercury-based Support-class Psynergy featured throughout the Golden Sun series. Restore is available to a wide wide variety of classes, and can also be emulated by the Elixir item.

Restore is a single-target non-damaging Psynergy that can only be used on an Adept affected by a Temporary Status Conditions such as: Stun, Sleep, Delusion, Psynergy Seal, and Death Curse. Though Restore is Mercury aligned, the Mercury Power of the user does not affect the potency of the Psynergy.

Despite the wide variety of status effects it heals, Restore will see little use. In most situations, battles will be too short for the temporary conditions to be of any major concern, since they end after a battle is over. In addition, most temporary status conditions do not have any noticeable impact on a normal battle. The main exception to this rule are longer boss battles, where conditions like Psynergy Seal and Death Curse would need to be removed. In addition, it does not remove the Haunt status, which would have made Restore invaluable. Thus, under normal circumstances, Restore could be ignored, with the player waiting for the status to wear off naturally.

It is worth mentioning that Elixirs have the same effect as Restore, which may be valuable if all Adepts with Restore are incapacitated. However, like Restore, Elixers do not see much use and players may wish to put that inventory space to better use.