Revive is a Venus-based Support Psynergy that is used to "Revive a downed ally" to full health. 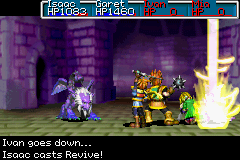 Revive only affects allies with the downed status. In battle, it can only be used on Adepts who are currently one of the four battling. Outside of battle, any party member can be targeted. In either case, Revive restores the targeted ally from a fallen state to 100% of their current HP.

Revive is the most valuable healing Psynergies along with the Wish Psynergy series. Revive is the most accessible method for healing downed Adepts. The item equivalent, the Water of Life, is normally expensive (3000 coins) and uncommon (barring the end of Dark Dawn). In addition, there is only 1 Djinn, Tinder guaranteed to revive an ally. Meanwhile, Revive is guaranteed to revive an ally to 100% health 100% of the time.

Revive is especially useful during boss battles, where party members have a higher chance of being downed. Since Revive is available to all Adepts, it is easy to have multiple Adepts with access to Revive, which helps to increase survivability.