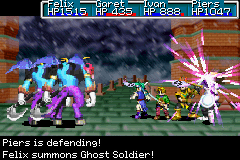 The Roc Psynergy set is a set of non-elemental, Venus, and Jupiter Psynergies available to the Tamer Class series. The set is rather unique when compared alongside other upgrading techniques (e.g. Ragnarok and Odyssey) for many reasons. First is that it is the only upgrading series in either game where one of the later Psynergies costs less than the previous Psynergy. In this case it is the Living Armor Psynergy, which costs 17 PP. The rest of the series, including the Psynergy that comes before and after, costs 22 PP. This may be because of a programing error as the Blue Dragon Psynergy, the Psynergy learned just before the Living Armor Psynergy, costs 17 PP. Secondly, this set has one of the very few Psynergy techniques that is not aligned with any element, the Roc Psynergy. Other examples would be the first two Psynergies in the Wild Wolf Psynergy set. The second and third Psynergies in this set, Grand Golem and Living Armor, are both Venus based, while the final, Ghost Soldier, is Jupiter based. Finally, it is one of the few upgrading series with more than two forms, possessing four total variations. The entire series is available at Level 45, and all techniques hit a single target.

Ghost Soldier is surprisingly strong and useful to any Adept that decides to be a Beast Lord (the Beast Lord's lowest-of-the-low PP rating aside), having the highest added damage value of all elemental physical attacks by a large margin (for comparison, the Apocalypse unleash of the Lachesis' Rule adds 125 damage points, and its effect is to potentially inflict Death Curse rather than potentially ignore half of the enemy's Defense). Ghost Soldier can be thought of as nothing else than a much more powerful version of the Kikuichimonji unleash, since like it, half the time Ghost Soldier may ignore half of the enemy's defense, sharply increasing damage late-game whenever it happens. Of course, it (alongside most other single-target offenses in the game) is far inferior to the Call Dullahan Psynergy of the Necromage, but Ghost Soldier is nonetheless a primary contributor to the Beast Lord class' viability.