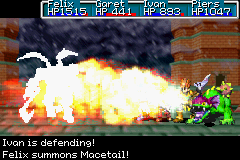 The Salamander Psynergy set is a set of Mars Psynergies available to the Tamer Class series. The set is rather unique when compared alongside other upgrading techniques (e.g. Ragnarok and Odyssey) for many reasons. First and foremost, the later forms cost no more Psynergy than their predecessors; the entire series costs 7 PP to perform. Finally, it is the one of the few upgrading series with more than two forms, possessing four total variations. The entire series is available at Level 10, and all techniques hit three targets. It should be noted that all secondary enemies receive far less damage than with a Mars Psynergy of comparable damage.

The series is available exclusively to the Tamer class series, meaning that any character can access this Psynergy. The whole series is learned at level 10, with the upgraded versions being available for the higher class stages.

Overall, this Psynergy set is very weak and very cheap, costing only 7PP for all stages. So technically, these Psynergies get more cost effective for every stage. However, the base power is just way too weak to be effective in most combat situations. In addition, the low damage distribution means that collateral targets will usually receive close to no damage. Even from the get go, Salamander and Cerberus are very underwhelming during the middle portion of the game. There are much better options for the Tamer class, as it sports very useful healing and buffing Psynergy. This Psynergy is easily outclassed by the Tamer's better area damage abilities. By the end of the game, Fire Dragon will most likely be learned, and the Salamander set will see very little use.