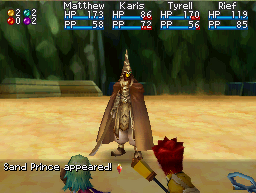 The Sand Prince is a boss in Golden Sun: Dark Dawn, found in the Alchemy Well located in Ayuthay.

The Sand Prince appears to be a benevolent being that resided in a room behind Ayuthay's Alchemy Well. When a group consisting of Matthew's party, as well as Amiti, prince of Ayuthay, come looking for a power that will reverse the flow of the Alchemy Well, the Sand Prince makes the group aware of his existence by telepathically contacting Amiti. When Matthew plays the Tree Flute in his room, the Sand Prince explains that he has been waiting for someone to share his power with. However, Matthew and his party would have to prove themselves by defeating him in battle, which would convert him to a gemstone. Matthew's party is victorious, and they gain access to the Sand Prince's power.

Later on, the Sand Prince contacts Amiti again when the group needs information about the Ice Queen. He reveals that she was a dangerous woman who would only use a fraction of her power to help others.