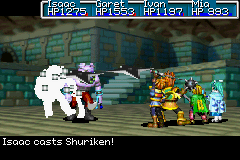 Shuriken is a stand-alone Psynergy aligned with the Jupiter element. It is one of two stand-alone abilities available to the Ninja class series, the other being Annihilation.

Shuriken is an offensive, ranged Psynergy that is Attack-dependent, meaning that characters with higher Attack will deal more damage with this Psynergy. In addition, the caster's Jupiter Power and the target's Defense and Jupiter Resistance will all factor into the damage dealt.

Visually, Shuriken features a group of large throwing stars appearing and flying from the user towards the targets.

Shuriken's attack takes this base damage value and uses it in the following equation:

To word this in prose, Shuriken takes the base damage of the user's normal physical attack, adds a set amount of bonus damage to that, and then this result is modified by how much higher or lower the user's Jupiter Power is than the target's Jupiter Resistance. The difference between the user's Jupiter Power and the target's Jupiter Resistance is divided by 400, then 1 is added to this, resulting in what can be called the "elemental damage multiplier". This number is what the Psynergies' damage is multiplied by.

Therefore, a Shuriken cast under these circumstances would deal approximately 200 points of damage. In the GBA games, unlike most ranged Psynergies, Shuriken does not decrease in power as the distance from the targeted enemy increases. Instead, all targeted enemies are dealt the same damage, barring differences in elemental resistance between enemies. As of Dark Dawn, though, damage diminishes at the standard rate.

General: Shuriken is an unusual Psynergy. It is one of the few Attack-based Psynergies to have a damage multiplier that is less than 1. Because of the low damage multiplier, it is usually passed over in favor of Death Leap and Annihilation for single targets. However, it does have a few advantages in ranged combat. In the GBA games, Shuriken targets all enemies for equal damage, whereas other ranged offenses have a diminishing ratio for targets farther away from the center of damage. In Golden Sun: Dark Dawn, however, damage diminishes the same as with any other attack.

Golden Sun and Golden Sun: The Lost Age: Shuriken is one of the only physical elemental attacks that affects multiple targets. This makes it ideal for battles against multiple opponents, where it can soften up opponents before dealing a final blow, particularly in the endgame, where physical attacks begin to outpower Power-based Psynergies.

Golden Sun: Dark Dawn: The addition of ranged weapon Unleashes takes away one of Shuriken's main advantages, as the majority of these Unleashes outpower Shuriken's low damage multiplier. As a Psynergy, Shuriken can be used on demand, whereas unleashes are unreliable due to the overhaul of the Unleash system. In most cases, however, an Unleash or another physical elemental attack would be preferred over Shuriken, due to the large increase in power as well as the loss of Shuriken's ability to hit all targets for equal damage.

Retrieved from "https://goldensun.fandom.com/wiki/Shuriken?oldid=42647"
Community content is available under CC-BY-SA unless otherwise noted.