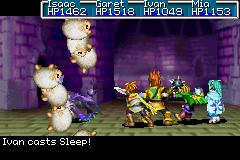 Sleep is a support-class Jupiter Psynergy featured in both games. It costs 5 Psynergy Points, targets three enemies and has a chance to "Lull multiple foes to sleep". While asleep, enemies or party members are left unable to move for a limited time. The effects of the spell do not carry on after battle, and the sleeping character or enemy may awake at the beginning of any turn. An Elixir or the Restore Psynergy may be used to cause a sleeping party member to awaken. Visually, the target of Sleep is bombarded with falling sheep until the attack ends. Sleep is virtually identical to the Sleep Card Psynergy. Sleep is learned by the Wind Seer class series, Ivan and Sheba's default classes, at level 12 and by the Apprentice class series and Page class series at level 14.

Sleep has the same problem as many other status inflicting Psynergy in that it will see little use. Sleep is basically ineffective against bosses and using it against monsters only prolongs the battle with no added experience points. Sleep should only be used early in the game against monsters that are tougher than your current party. Other than that it has limited use.

Later on, when having the Summon called Flora, invocking it will help you damage enemies, with sleep as an extra effect. Even some Bosses will be affected by it. Due to the nature of that attack, in case you really wish to put an enemy to sleep, then Flora is your woman ( = summon) for doing that job!

Retrieved from "https://goldensun.fandom.com/wiki/Sleep_(Psynergy)?oldid=41657"
Community content is available under CC-BY-SA unless otherwise noted.