Spire, Clay Spire, and Stone Spire make up a series of Venus Psynergy featured throughout the Golden Sun series. 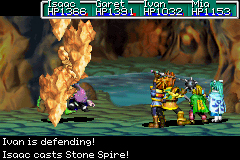 Spire, Clay Spire, and Stone Spire are offensive, ranged Psynergies. The overall power of each stage is determined by comparing the user's Venus Power and the target's Venus Resistance, and multiplying the resultant ratio by the base power of the Psynergy being used.

Spire: “Attack with an earthen spire.”: This costs 5 Psynergy Points, has a base power of 40 onwards, and has a range of one target. A thick stalactite falls onto the enemy and shatters. It is available at level 6.

Clay Spire: “Attack with an earthen spire.”: This costs 13 Psynergy Points, has a base power of 85, and has a range of three targets. A group of three larger stalactites fall onto the enemies and shatter. It is available at level 20.

Stone Spire: “Attack with an earthen spire.”: This costs 22 Psynergy Points, has a base power of 160, and has a range of three targets. A group of five larger still stalactites fall onto the enemies and shatter. It is available at level 42.

Visually, each stage of the Spire series features large stalactites that form above and strike the target(s). The stalactites shatter as they strike. The number and size of the stalactites increases with each successive stage.

Elemental Power attacks such as Spire, Clay Spire, and Stone Spire use a set base power as the base damage to be modified. For example, the base power of Stone Spire, is 160. Thus, an unmodified Stone Spire would deal around 160 points of damage.

Attacks from Spire, Clay Spire, and Stone Spire take this base damage value and use it in the following equation:

For example, if an Adept with a Venus Power of 150 casts Stone Spire on a monster with a Venus Resistance of 50:

Therefore, a Stone Spire cast under these circumstances would deal approximately 240 points of damage to the main target. Since Stone Spire is a ranged Psynergy, adjacent targets would take a percentage of the total damage, with the percentage decreasing as the distance from the main target increases.

The Spire series is available to the Squire class series and the Brute Class series. The Squire class series is a mono-elemental Venus class that serves as the base class for Isaac, Felix, and Matthew. The Brute class is a dual-elemental class available to all Venus and Mars Adepts, with the exception of Himi. Mars Adepts require large amounts of Venus Djinn to access the class, while Venus Adepts require Mars Djinn. It should be noted that in Golden Sun and Golden Sun: The Lost Age, the Brute class's access to the Spire series was limited to the stages of Savage and above, which required four of the necessary Djinn. In Dark Dawn, this requirement was removed, allowing all stages of the Brute class to access the series. For both classes, Spire is available at Level 4, Clay Spire at Level 20, and Stone Spire at Level 42.

General: For the Squire class, the Spire series serves as a midpoint between the cheap but weak Quake Psynergy series and the strong yet expensive Gaia Psynergy series. Spire serves as an alternative to Quake and Earthquake, trading range for power. Thus, Spire is excellent in battles against single opponents. Later on, the series competes with the raw power of Ragnarok and Odyssey, which increase in power as Attack rises. However, Clay Spire and Stone Spire are still good options for softening up multiple targets, and are better for conserving PP, in comparison to Grand Gaia.

For the Brute class, the Spire series is the strongest Venus Psynergy series available, with Stone Spire holding the title of the class's strongest Power-based Psynergy. Given the class's low PP pool, the series's use will be limited during longer battles, where the player would prefer the class's high Attack.

Golden Sun: Spire will be a useful early game Psynergy. Near game's end, Clay Spire will be a cheaper alternative to Mother Gaia, but both will compete with the Brute's Planet Diver and the Squire's Ragnarok.

Golden Sun: The Lost Age: Felix will learn Spire soon after the main portion of the game begins. Clay Spire will be one of the Psynergies of choice for fighting random encounters while exploring the Eastern Sea, though it will compete with Ragnarok and Mother Gaia. Stone Spire will be the strongest ranged option during the latter portions of the game, due to the fact that Grand Gaia is not learned until Level 54, while Stone Spire is learned 12 levels earlier.

Golden Sun: Dark Dawn: Spire is an excellent option when fighting the Dim Dragon, due to its power. Clay Spire will be useful during the latter portions of Ei-Jei and early Morgal. Stone Spire is a useful option while exploring the Eastern Sea, as well as for fighting against Tua Warriors, which come in groups of 2 or 3, while leveling up before the final battle.