Starburst, Nova, and Supernova are a series of Mars Psynergy featured throughout the Golden Sun series. Starburst, prior to Golden Sun: Dark Dawn, was known in English as Blast, a named shared with the first Psynergy in the Blast (Fiery) Psynergy series, which can occasionally lead to confusion, though the original Japanese names of the two Blasts were distinct. In addition, the series's visual effects in Golden Sun and Golden Sun: The Lost Age were shared with the Fire Bomb Psynergy series. The series was featured in a floor demo for Dark Dawn seen at E3 2010. 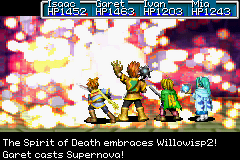 Starburst, Nova, and Supernova are offensive, ranged Psynergies. The total amount of damage is determined by comparing the user's Mars Power to the target's Mars Resistance and using this value to modify the base power of the particular Psynergy.

Nova: GS and TLA: "Attack with a massive explosion."; DD: "Strike with a blast like a star exploding." This costs 13 Psynergy Points, has a base power of 70, and has a range of five targets. A large explosion of fire discharges at the enemy party's position. It is available at level 16.

Supernova: GS and TLA: "Attack with a massive explosion."; DD: "Strike with a force that shakes the skies." This costs 31 Psynergy Points, has a base power of 150, and has a range of seven targets. A large and extended explosion of fire discharges at the enemy party's position. It is available at level 40.

The visual effects for each stage feature a large explosion which separates into a mass of fireballs. The explosion was larger and longer in duration with each progressive stage.

Elemental Power attacks such as Starburst, Nova, and Supernova use a set base power as the base damage to be modified. For example, the base power of Supernova is 150. Thus an unmodified Supernova would do around 150 points of damage.

Supernova's attack takes this base damage value and uses it in the following equation:

For example, if an Adept with a Mars Power of 150 casts Supernova on a monster with a Mars Resistance of 50:

Therefore, a Supernova cast under these circumstances would deal approximately 225 points of damage to the targeted enemy. Since Supernova is a ranged Psynergy, adjacent targets take a percentage of the total damage, with the percentage decreasing as distance from the main target increases.

The availability of the Starburst series varies between appearances. In Golden Sun and The Lost Age, the series was unique to the Brute class series, available to the Venus and Mars Adepts of those titles. Venus Adepts required large amounts of Mars Djinn, while Mars Adepts needed Venus Djinn. Blast, as it was known then, was learned at Level 6, while Nova was learned at level 16, and Supernova at Level 40.

General: The Starburst series is midway in strength among the Power-based Mars Psynergies. Each stage has decent power, though Supernova's high cost can be a detraction. However, it can still see use in the classes it belongs to, due to its wide range making it flexible.

Golden Sun and Golden Sun: The Lost Age: The series is the most powerful multi-target Mars series available to the Brute. Since the Brute class is often used for its high Attack, the series can see use as a way to weaken multiple targets.

Golden Sun: Dark Dawn: The Starburst series replaces the Fire Psynergy series that was available to the Guard class in the GBA games. While the Starburst series is more powerful than the series it replaces, it is more expensive. Starburst will compete with Flare Wall, as both psynergies are equal in power and PP requirements. Nova is slightly weaker and more expensive than Flare Storm, but has a wider range. Supernova, however, merely serves as a placeholder for Pyroclasm, which is significantly more powerful while being slightly cheaper, a noteworthy fact given the Guard's low PP multiplier. Thus, Pyroclasm remains the endgame Psynergy of choice.