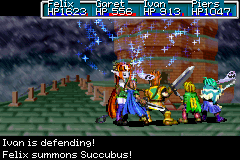 The Succubus Psynergy is a stand-alone Support Psynergy available only to the Beast Lord class. When used, it summons a Siren to heal one party member. The naming anomaly is due to the fact that the monster known as "Siren" in the English version of Golden Sun is named "Succubus" in the Japanese version. Thus, the monster is directly related to the actual (English version) Succubus, a boss of Crossbone Isle in the first Golden Sun, nonetheless.

This Psynergy is available to only the Beast Lord stage of the Tamer series and is learned at level 24. Thus, any Adept can access this Psynergy.

Succubus is a basic Mercury Psynergy that functions as a slightly stronger variant to the more commonly used Ply Well; instead of restoring 200 HP to one character for 8 PP, it restores 250 for 9. This makes it quite a bit more useful when the extremely low PP of the Beast Lord class is taken into consideration; however, this is offset by being learned at a much later level. Furthermore, as the Succubus Psynergy is only available to the Beast Lord class, it requires the player to collect almost all the Djinn in The Lost Age (as the Beast Lord class requires 9 Djinn to be set onto a single Adept), it is only available toward the very end of the game, meaning that the player would probably already have acquired the much more potent Pure Ply (available at level 34) by the time this Psynergy becomes available. Also, this Psynergy cannot be used outside of battle unlike other healing abilities.