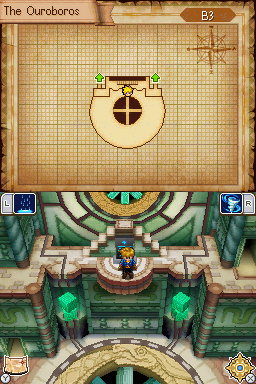 Ouroboros is a labyrinth, located under Kaocho. It was built by the ancient Exathi of current day Ayuthay to hide the Sol Mask. It is said to ensnare anyone who enters.

The Ouroboros was built sometime in Weyard's Ancient Past by the Exathi ancestors of modern-day Ayuthay. The Exathi of Ayuthay were noted stone carvers, thus, the Ouroboros features stone architecture, as well as Zol, which was heavily used by the Exathi. Additionally, the Ouroboros features a noticeable snake theme, with snake statues and a zol staircase carved in the shape of a snake. At some point, the Sol Mask, a necessary component of the Alchemy Forge owned by Ayuthay's ally, Passaj, was hidden in the depths of the labyrinth.

In modern times, the Ouroboros now lies hidden beneath the city of Kaocho. King Wo, founder of Kaocho, built his city upon the ruins. Though his initial reason for choosing the site are not described in detail, he had expressed a wish of eventually gaining the Sol Mask within. It had been suggested that he wished to take Passaj's Alchemy Forge for himself. At some point, Kaocho would ask Ayuthay, the creators of the Ouroboros, for advice, but Ayuthay refused to tell. Over the years, many people would attempt to explore the Ouroboros but none would emerge, giving the labyrinth its dangerous reputation.

Eventually, Matthew and his party would come to Kaocho in an attempt to gain the Sol Mask to complete Passaj's Alchemy Forge. Upon hearing of the Adepts' arrival, King Wo would attempt to enlist them in his own search. When the party refused, King Wo attempted to trap them within the ruins, with no way to gain the mask. However, the party was eventually able to escape, and traveled to Ayuthay in an attempt to learn the true way to enter.

In Ayuthay, the party was able to learn that the Ouroboros had a secret entrance only accessible via the Insight Psynergy. The party would eventually gain the Insight Psynergy, which would be wielded by Amiti, a Mercury Adept and the prince of Ayuthay. Amiti would travel to Kaocho with Matthew's party, and helped them to enter the labyrinth properly. Eventually, the party would obtain the Sol Mask, which they secretly returned to Passaj.

In actual gameplay, the Ouroboros is not as difficult as the characters in the game claim. This is largely because the dungeon itself is not difficult, but rather the real problem comes in that to solve it, one needs to find the true entrance to the Ouroboros which cannot be detected without Amiti. After that, the dungeon is very straightforward, the few detours one can make are largely for treasures and even then, they are simple and one can retake their main path without much delay. Mostly the Move (to move snake statues), Whirlwind (to bring up zol cubes) and Fireball (to burn away snake tongues) Psynergies are needed to solve the dungeon.

The green stairs in B2 going down from the left is the best power leveling environment by far up to the current plot progression and areas unlocked.

The Ouroboros contains the following monster types, 1 to 3 may spawn per battle (usually 2)

The most common encounter on the stairs 2 Curse Demons, giving a huge 1,010 XP in a single battle. This is similar or more XP than the boss battles that have occured since the game started.

The name ouroboros is Greek ("ουροβóρος") and means tail-eater. In real world mythology it is often depicted as a snake or dragon biting its own tail. It symbolizes the eternal cycle of nature.