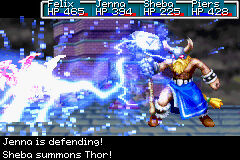 "The mighty god of thunder."

Thor is a Summon sequence of the Jupiter element. When four Djinn of the Jupiter Element are on standby, the Thor Summon sequence can be activated. When Thor is summoned, a circular magical seal bearing the Rune meaning "giant", glowing with rainbow light, forms in the midst of dark clouds and shoots down to the battlefield in the form of a lightning bolt, which the famed Viking god emerges from. He then proceeds to use his lightning hammer, Mjollnir (which has the same Runic symbol that began the sequence), to blast lightning upon the opposing party.

Thor has a base Jupiter power of 240 and also does additional damage equivalent to 12% of the enemy’s maximum HP. Thor is among the most useful Jupiter summon sequences and one of the most widely used. It is twice as powerful as Procne and four times as powerful as Atalanta and uses only 2 times the amount of Djinn on standby as Atalanta does. It can be very effective against many bosses in both games.

Thor makes a return appearance as a summon in Golden Sun: Dark Dawn. Aside from his beard now being a bold red, he appears similar to his previous incarnation, but his method of attack is completely different: Thor freefalls through the clouds high above the ground, and with a wave of his right arm, he transforms his hammer falling above him into an enormous, rocket-propelled spark plug. He then grabs onto it with his right arm and hurls it down to the ground at the feet of the enemy forces with extreme velocity. The metal bolt slams onto the ground and lets loose lots of purple electricity.

Thor, in Norse mythology, was the god of thunder, and enemy of many monsters, especially the Frost Giants and the Trolls. He had a hammer that could be thrown like a boomerang and always return to its wielder. During the Ragnarok, however, he and Jormungandr, the world serpent, would kill each other.