Thorn, Briar, and Nettle are a series of Venus Psynergy featured throughout the Golden Sun series. One of the battle scenes showcased in Golden Sun: Dark Dawn shows Matthew using a Psynergy spell that appears to be a Psynergy from this series in full 3D. 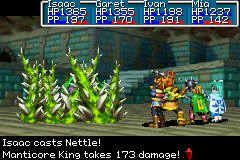 Thorn, Briar, and Nettle are offensive, ranged Psynergies. The overall power of each stage is determined by comparing the user's Venus Power and the target's Venus Resistance, and multiplying the resultant ratio by the base power of the Psynergy being used.

Thorn: "Attack with stabbing thorns.": This costs 6 Psynergy Points, has a base power of 35, and has a range of three targets. A few large spiked vines grow out of the ground quickly to assault the opposition. It is available at level 6.

Briar: "Attack with sharpened briars.": This costs 11 Psynergy Points, has a base power of 70, and has a range of three targets. A series of quite large spiked vines grow out of the ground quickly to assault the opposition. It is available at level 14 for the Swordsman class and 17 for the Dragoon class.

Nettle: "Attack with stinging nettles.": This costs 23 Psynergy Points, has a base power of 140, and has a range of five targets. A large series of very large spiked vines grow out of the ground quickly to assault the opposition. It is available at level 36.

Elemental Power attacks such as Thorn, Briar, and Nettle use a set base power as the base damage to be modified. For example, the base power of Nettle is 140. Thus an unmodified Nettle would deal around 140 points of damage.

The respective base damage value for the Psynergy being used is then entered into the following equation:

Therefore, a Nettle cast under these circumstances would deal approximately 210 points of damage to the main target. Since Nettle is a ranged Psynergy, adjacent targets would take a percentage of the total damage, with the percentage decreasing as the distance from the main target increases.

The Thorn series is available to the Miko class series, a mono-elemental class unique to Himi. Himi can access this class when she has no or only Venus Djinn set to her. Additionally, the series is also available to the Swordsman (Venus) class series and the Dragoon class series. Hence, it's possible for all Venus, Mercury, and Mars Adepts to use this series. However, the Swordsman class requires a combination of either Venus and Mercury Djinn, while the Dragoon class requires a mixture of Venus, Mars, and Mercury Djinn, with the specific mix differing depending on the element of the Adept.

All three classes learn Thorn at Level 4 and Nettle at Level 36. Briar is available at Level 14 for the Swordsman and Miko, while the Dragoon class learns it at Level 17.

General: The Thorn series is a moderately powerful series, available fairly early. The series is the only Venus Psynergy available to the Swordsman and Dragoon class, meaning that it will be a main form of offense for those two classes. In terms of overall power, however, it is outperformed by the Gaia series.

Golden Sun: The Thorn series can prove to be a valuable Venus-based multi-target Psynergy, as it is more powerful than the Quake Psynergy series and available earlier than the multi-target variants of the Spire Psynergy series. In certain situations, the player may choose to use the Swordsman series to attack Mars-based enemies, allowing Thorn and Briar to see use.

Golden Sun: Dark Dawn: For Himi, the Thorn series lies in between the cheaper Growth series and the more powerful Roaring Dragon Psynergy series. As Slaying Dragon and Reining Dragon are fairly expensive, Nettle can still see use in situations where the player wants to conserve PP.

An item known as a Bramble Seed can be used by any Adept to emulate the Nettle Psynergy for Venus Damage to multiple enemies. Bramble Seeds are found as random drops from enemies or as treasure chest.