Thunderclap, Thunderbolt, and Thunderhead are a series of offensive Jupiter Psynergies featured throughout the Golden Sun series. Thunderhead was originally called Thunderstorm, but this name was too long for the single line allotted to it, causing some display glitches that sometimes occur when it is highlighted. The issue was fixed by renaming the Psynergy in Golden Sun: The Lost Age. Prior to Golden Sun: Dark Dawn, the series was visually identical to the Plasma Psynergy series. 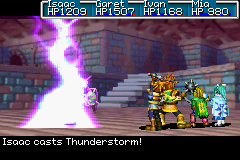 Thunderclap, Thunderbolt, and Thunderhead are offensive, ranged Psynergies. The total amount of damage is determined by comparing the user's Jupiter Power to the target's Jupiter Resistance and using this value to modify the base power of the particular Psynergy.

Thunderclap is the first spell of the series. It is described as an "attack with the storm's fury." It appears as a single, wide bolt of purplish-white lightning firing down on the enemy before exploding on impact with the ground. Thunderclap is learned at Level 8, hits three targets with Jupiter power of 50, and costs 9 PP to perform.

Thunderbolt is the second ability learned. It is described as an "attack with the storm's fury." It takes on the form of three individual Thunderclap attacks striking in succession. Thunderbolt is learned at Level 26, hits five targets with Jupiter power of 110, and costs 19 PP to perform.

Thunderhead (Thunderstorm in Golden Sun) is the third and final power in the series. It is also described as an "attack with the storm's fury." It appears as a barrage of normal Thunderclap attacks being volleyed without ceasing into the targeted enemies. Thunderhead is learned at Level 50 and it hits seven targets for Jupiter power of 190, and costs a tremendous 39 PP to perform.

In Golden Sun: Dark Dawn, each stage of the series has unique but similar visuals. The series (like many Psynergies belonging to the Ninja class), features a unique casting animation that involves a scroll (colored purple to match the element of the series) forming around the caster, which then dissolves into purple characters that spread outward. Thunderclap features a single purple bolt of lighting which strikes the opponent. Thunderbolt features a short crackling of lighting from a cloud, after which two small lighting bolts strike the targets in quick succession. Thunderhead features a longer crackling of lighting from the cloud, followed by a single large lighting bolt striking the targets.

Elemental Power attacks such as Thunderclap, Thunderbolt, and Thunderhead use a set base power as the base damage to be modified. For example, the base power of Thunderhead is 190. Thus an unmodified Thunderhead would do around 190 points of damage.

Thunderclap, Thunderbolt, and Thunderhead are unique to the Ninja class series. Thus all Venus, Mars, and Jupiter Adepts can access the series. To access the class, Venus Adepts require a combination of Mars and Jupiter Djinn, while Mars Adepts need Jupiter and Venus Djinn. Jupiter Adepts require a specific combination of Mars and Venus Djinn.

While most of the Ninja's ranged Psynergies are weaker than their counterparts, the Thunderclap series is actually superior in power to the Plasma series. In addition, the each stage of the Thunderclap series is available at the same levels as their Plasma series counterparts. Thunderhead has the distinction of being the strongest Power-based Jupiter Psynergy, which makes it useful for any mage-style Adepts, particularly Jupiter Adepts, that may be utilizing the class. Due to its power, Thunderhead is a useful endgame Psynergy, excellent for softening up groups of enemies. The main drawbacks are that Thunderhead is tied for the most expensive Psynergy in the series, and the higher levels at which they are learned, though the cost and level are not much higher than Spark Plasma. This is offset by the large pool of Psynergy that a Ninja receives, with the Master class receiving a 160% bonus.