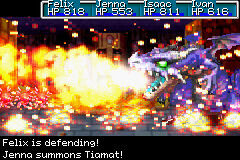 "The queen of all dragons."

Tiamat is a Summon sequence of the Mars element. When three Djinn of the Mars Element are on standby, the Tiamat Summon sequence can be activated. It resembles a large purple dragon with tiny wings which drops in along with several balls of fire, waits a moment, and then breathes fire onto the enemy party.

Tiamat has a base Mars power of 120 and also does additional damage equivalent to 9% of the enemy’s maximum HP. Tiamat is the first truly useful Mars summon sequence. It is twice as powerful as Kirin and uses only 1.5 times the amount of Djinn on standby. It can be very effective in the boss fight against the Hydros Statue in Altin Peak.

Tiamat was a monster and/or primal goddess in Babylonian and Sumerian mythology, associated with salt water and chaos. She was incited by her son Kingu to kill the gods for the assassination of her husband Apsu, but was instead slain by Marduk, who formed heaven and earth from the components of her body. Though not a fire-based creature as shown in Golden Sun and other RPGs, the original myths speak of Tiamat generating pillars of fire along with other disasters when she prepared for battle against Marduk. She is often portrayed in the form of a sea serpent or dragon, although this is only done in modern times. Early Sumerian seals do, however, depict horned serpents or griffin-like creatures that may be associated with her.

In the Japanese version, the summon is known as Vesta, the Roman goddess of the hearth, home, and family. Vesta's presence was symbolized by the sacred fire that burned at her hearth and temples. Her closest Greek equivalent is Hestia.