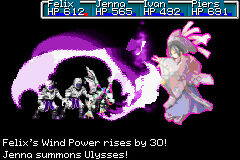 Ulysses is a Summon of the Mars element first appearing in Golden Sun: The Lost Age. It is one of fourteen Summons that are not automatically available once the required Djinn are collected. Instead, the summon must be specifically acquired from a Summon Tablet.

When 2 Mars Djinn and 2 Mercury Djinn are on standby, and Ulysses’ Summon Tablet has been collected, the Ulysses Summon can be activated.

Before Ulysses can be summoned, it must first be acquired from a Summon Tablet.

In Dark Dawn, Ulysses is found in an abandoned mine far to the west of Border Town. However, the only way to reach this mine is by going all the way north (possibly finding the Venus Djinni Gears on the way) and turning west on the bridge. Follow the path until you reach the mine. Manipulate the tracks and light the bomb with Tyrell's Fireball Psynergy. If you activate the Grave Eclipse before retrieving Ulysses, it becomes impossible to access it again by conventional means, but it can be obtained at the end of the game by means of the Endless Wall glitch. However, after doing this, northern Angara cannot simply be exited. The only way to return to the rest of the game is to fall in battle without having visited any towns since performing the glitch, which will send the party to the sanctum of the most recently visited town. Because of this, while Ulysses might appear to be permanently missed, if glitches are used, it always remains possible to obtain it.

For a successful summoning of Ulysses, the player must have 2 Mars Djinn and 2 Mercury Djinn on Standby. Ulysses has a base Mars power of 160 and also does additional damage equivalent to 12% of the enemy’s maximum HP. In addition, there is a small chance that each foe hit will lose its next turn in battle. Afterwards, the summoner's Mars and Mercury Power will rise by 30 points each.

Ulysses is not considered a useful Summon; it does roughly 2/3rds the damage as Meteor, which uses the same number of Djinn for activation, and its additional effect does not activate often enough to make up for the lack of damage. What would make it useful as an alternative to Meteor is that it uses 2 Mars Djinn and 2 Mercury Djinn; a Mars Adept casting Ulysses would only need 2 Mars Djinn on standby to summon Ulysses while the rest of that adept’s Mars Djinn would be Set and therefore provide statistical boosts and a better class to that Adept (it can happen that an Adept with 4 Djinn on standby may be KO’ed before he can use those standby Djinn for summoning due to his statistical weakness). This also makes it more available than Meteor for random battles. It is probably most useful in the battle with Poseidon where it can be used more frequently than Meteor while also making use of Mercury Djinn that would otherwise be wasted on the less effective Boreas.

The Ulysses featured in Golden Sun bears no resemblance to the original. Ulysses (or Odysseus in the original Greek) was a protagonist featured in the Greek poet Homer's The Iliad and The Odyssey. Ulysses was king of Ithaca, and sworn to defend the marriage of King Menelaus and Queen Helen of Sparta. Therefore he had to lead forces against Troy to recover Helen when she was kidnapped by Prince Paris of Troy. After the war was won through his cleverness, Ulysses sailed home to Ithaca but encountered many trials and tribulations on the way, causing him to arrive only after ten years.

The connection between this Ulysses and the one in Golden Sun may be the use of the Mercury Djinn, as Ulysses spent most of his adventures at sea. As Mars, the other Djinn needed to summon him, is the god of war, this may be a connection to Ulysses' role in the Trojan War. As well as the fact that Golden Sun's Ulysses is described as a wandering mage where as Homer's Ulysses spent twenty years wandering the seas for his home land.

In Dark Dawn, however, Ulysses' appearance has been changed to fit with his real-life counterpart; in that game he appears as a giant, lavender-skinned, near-perfectly sculpted Greek hero, appearing similar to how Greco-Roman statues might depict him.

Ulysses separated sprite
Add a photo to this gallery
Retrieved from "https://goldensun.fandom.com/wiki/Ulysses?oldid=43319"
Community content is available under CC-BY-SA unless otherwise noted.