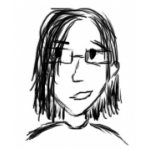 Dracobolt is an ardent Golden Sun fan who dreamed of creating a wiki for the games. She started one using PBwiki, and that project gained great support among other fans. When her pal Joe found this site, she decided to transfer the articles she and the others had worked on over to Wikia. Now things are in the hands of admirable editors like Hinoa and Erik the Appreciator, who do a great job and are hard-working, brilliant people.

Draco is a college student, a female, and a Golden Sun fanfiction author. She also thinks that Skies of Arcadia is so much better than Tales of Symphonia, which sucks. She is an admin at the Temple of Kraden. Draco likes to refer to herself in third person at times. As long as she doesn't take to haunting opera houses and abducting sopranos, she thinks it's not a bad thing.

Draco also happens to be the "sysop" here. If you need something done that only a sysop can do, just contact her on AIM(dracobolt) or MSN(dracobolt@hotmail.com). You can, of course, post on her talk page, but the most immediate way to contact her is through messengers. Also, she doesn't check her hotmail e-mail very often, so don't bother sending anything there. Also, since Draco talks to Erik the Appreciator a lot, and since Erik edits here with an obsessiveness usually only found in heroin addicts and the like, if there's something really important, you can probably ask Erik to pass it on to Draco.

Retrieved from "https://goldensun.fandom.com/wiki/User:Dracobolt?oldid=14516"
Community content is available under CC-BY-SA unless otherwise noted.