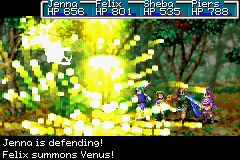 "The elemental power of earth."

Venus is a Summon sequence in Golden Sun and Golden Sun: The Lost Age. When one Djinni of the Venus Element is on standby, the Venus Summon sequence can be activated. It resembles an image of a Venus Djinni summoning yellow energy from the ground to engulf the enemy party. It has a base Venus power of 30 and also does additional damage equivalent to 3% of the enemy’s maximum HP.

Venus full sequence
Add a photo to this gallery
Retrieved from "https://goldensun.fandom.com/wiki/Venus_(summon)?oldid=42912"
Community content is available under CC-BY-SA unless otherwise noted.