The Ward Psynergy series is a Support Psynergy found in both of the Golden Sun games. Both are Jupiter based and are identical to the Magic Shell Psynergy series, which is available to the Samurai class series. This series is available to the Wind Seer, at Mage or higher, Apprentice, at Enchanter or higher, Page, Pilgrim (Jupiter), at Ascetic or higher, Seer (Jupiter), at Shaman or higher, White Mage, and the Ranger class series. Because of the many diverse classes that it is availible to, any Adept can have access to this series. 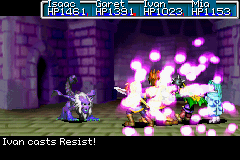 Resist costs 5 PP, and is used to boost the Resistance of the entire party by 20, with 80 once again being the max. The Wind Seer, Page, and the Apprentice all learn it at 22, with the Seer learning it at level 23. The Pilgrim and Ranger then learn it next at 24 with the White Mage finally learning it at level 31.

A fairly staple move to the RPG genre, raising your own resistance can be a lifesaver in battles with enemies that rely on high-power Psynergy. Although most bosses can cast Break and considering that the effects only last for a few turns, the party may find themselves casting Ward/Resist only to have the effects wear off before the enemy attacks, hence wasting a turn and some PP. However, against certain bosses, such as the Star Magician, who, along with his ball minions, repeatedly cast Psynergy, Ward/Resist can be a highly useful Psynergy. Being more accessible to the caster classes than the Guard Psynergy series, Resist will probably be used more often to soften incoming damage than Protect. In particularly in the fight with Dullahan, Resist can be used in an emergency to reduce the damage of Charon summoned by the boss after the Element Swap signal is given.