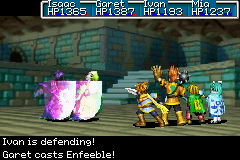 Weaken is the first Psynergy in the series. It hits 1 target, costs 4 PP and is learned at level 9. It is used to lower the target's Resistance by 40, up to the maximum of 80.

Enfeeble is the second Psynergy in the series. It hits 3 targets, costs 6 PP and is learned at level 25. It is used to lower the targets' Resistance by 20, with the Max again at 80.

A fairly staple move to the RPG genre, lowering an opponents resistance can be a useful bit of Psynergy, especially since it does work on most bosses. However, it only lasts for a short period of time, meaning that to make it effective, the increase in damage dealt before it wears off must exceed the damage that could be done through attacking normally. Because of this, casting it immediately prior to summoning, or other such heavy-damage Psynergy, can make Weaken or Enfeeble a valuable asset in the player's arsenal.

Retrieved from "https://goldensun.fandom.com/wiki/Weaken_Psynergy_series?oldid=29389"
Community content is available under CC-BY-SA unless otherwise noted.