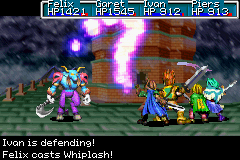 Whiplash is aligned with the Jupiter element, costs 6 PP to use, and is learned at Level 10. This Psynergy is exclusive to the Tamer class series, which every Adept can access. Every stage of the Tamer class keeps access to Whiplash.

It keeps a trend with many other Psynergies like it by multiplying its caster's Attack stat for its base damage; in this case, a 1.4 multiplier is used. Whiplash is not a very well liked ability, however; as with many of the Tamer series' abilities, it is considered to be unremarkable and easily substituted by other techniques. Fortunately, it is learned very early and does take advantage of the Tamer's above-average Attack stat. Coupled with its rather cheap cost, Whiplash makes for a somewhat spammable attack.

Retrieved from "https://goldensun.fandom.com/wiki/Whiplash?oldid=42367"
Community content is available under CC-BY-SA unless otherwise noted.