Whirlwind, Tornado, and Tempest are a series of Jupiter attack Psynergy featured throughout the Golden Sun series. This Psynergy series is nearly identical to the Gale Psynergy series in the GBA games. While still similar in Golden Sun: Dark Dawn, the two series now posses distinct visuals. The first stage of the series, Whirlwind, is also a Utility Psynergy used throughout the Golden Sun series. Whirlwind's Encyclopedia entry in Dark Dawn reads as follows:

This wind-based Psynergy summons a small tornado. Light objects may be blown away by the wind. The whirlwind also pushes the user back slightly. 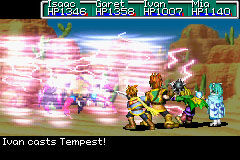 Whirlwind, Tornado, and Tempest are offensive, ranged Psynergies. Each Psynergy has a specific base power that is modified based on the caster's Jupiter Power and the target's Jupiter Resistance.

Whirlwind: “Attack with a swirling tornado.”: This costs 5 Psynergy Points, has a base power of 20, and has a range of three targets. A large whirlwind with minor electric charges spins through the enemy party. Whirlwind is also a Psynergy that can be used in the field. It can be used to blow away suspicious, small bushes of leaves and influence ivy and activate whirlwind monuments in Air's Rock and Shaman Village. It is available at level 1. In terms of the storyline, the werewolves of Garoh possess this power.

Tornado: “Attack with a mighty tornado.”: This costs 14 Psynergy Points, has a base power of 80, and has a range of five targets. Two large whirlwinds with minor electric charges spin through the enemy party. It is available at level 18.

Tempest: “Attack with a fearsome windstorm.”: This costs 27 Psynergy Points, has a base power of 160, and has a range of five targets. Four large whirlwinds with minor electric charges spin through the enemy party. It is available at level 44.

The visual effects of each stage of the series is generally similar but varies slightly depending on the specific stage. Each stage shows tornadoes with slight electric charges spinning though the targets: Whirlwind has one tornado, Tornado has two, and Tempest has four.

Elemental Power attacks such as the Whirlwind series use a set base power as the base damage to be modified. For example, the base power of Tempest is 160. Thus, an unmodified Tempest would do around 160 points of damage.

Whirlwind's attack takes this base damage value and uses it in the following equation:

To word this in prose, the Whirlwind series takes the base damage of the particular attack, and then modifies this by how much higher or lower the user's Jupiter Power is than the target's Jupiter Resistance. The difference between the user's Jupiter Power and the target's Jupiter Resistance is then divided by 200, then 1 is added to this, resulting in what can be called the "elemental damage multiplier". This number is what the Psynergies' damage is multiplied by.

Therefore, a Tempest cast under these circumstances would deal approximately 240 points of damage to the targeted enemy. Since Tempest is a ranged Psynergy, adjacent targets take a percentage of the total damage, with the percentage decreasing as distance from the main target increases.

Whirlwind as a Utility Psynergy[]

Whirlwind can be used in the field as a Utility Psynergy that removes plantlike obstacles such as small bushes that impede the player's path; this is integral to many puzzles in both games, enough that the Jupiter Adepts, Ivan and Sheba, should be kept in their default Wind Seer class series so that the Psynergy is available. In The Lost Age, casting Whirlwind on Wind Stones at Air's Rock allows the stone to strengthen Whirlwind, causing a variety of effects.

In Dark Dawn, Karis will know Whirlwind regardless of her class, so the player can be more varied with her classes. Whirlwind is changed so that it can now be shot at a target from a distance, and can be aimed in any direction in a 360 degree radius. It also has many more uses. Whirlwind can push the player back, which is useful for controlling rafts; the player simply shoots Whirlwind in the direction opposite of where they want to travel. It is also used to make small fans spin and to change the direction of large arrows; both objects can affect parts of the surrounding landscape. Finally, casting Whirlwind on Zol blocks causes the blocks to hover in the air for a short period of time. In the Belinsk Ruins, Whirlwind is used in several puzzles as the embodiment of Jupiter.

The Whirlwind series is exclusive to the mono-elemental Jupiter classes, the Wind Seer class series and the Beasting class series. Thus, the Whirlwind series is exclusive to the playable Jupiter Adepts, Ivan, Karis, Sheba, and Sveta. All four Adepts can access the series when no Djinn or only Jupiter Djinn are Set to them. Additionally, Karis will retain access to the first stage, Whirlwind, no matter her current class. For both classes, Whirlwind is available at Level 1, Tornado at Level 18, and Tempest at Level 44.

General: The Whirlwind series can be considered one of the most underrated choices for Jupiter Adepts. Available early on, Whirlwind is both cheap and powerful, making it an extremely efficient offense. While the Plasma Psynergy series is seen as the premier ranged Jupiter series, the Whirlwind series distinguishes itself by being both cheaper and available at a much earlier point. Thus, it will receive a great deal of usage, as it is available to every playable Jupiter Adept.

Golden Sun and Golden Sun: The Lost Age: For both Sheba and Ivan, the Whirlwind series plays the role of a middle ground between the cheap but weaker Ray Psynergy series, and the expensive but powerful Plasma Psynergy series. Due to PP limitations early on, Ray may see more use early on compared to Whirlwind, as Whirlwind will also see use as a Utility Psynergy. In addition, Plasma deals more damage than Ray for only a small increase in cost, and hence may see more use once level 8 is reached. As the game progresses, however, Tornado and Tempest become more cost-effective, retaining a great deal of power for less cost than the expensive Shine Plasma and Spark Plasma.

Golden Sun: Dark Dawn: For Karis, the Whirlwind series is her only offensive series other than the Plasma series. Due to long periods of time between new offensive Psynergies, the Whirlwind series will see a great deal of use as the game progresses. Sveta also learns the series in her base class. Whirlwind will initially be weaker than both Ray and Slash; however, Tornado and Tempest will be stronger than their counterparts, with Tempest being her strongest offensive Psynergy. In both cases, however, the series will see a comparative drop in usage compared to earlier games. This is because the player can more easily choose other classes, as they no longer need to keep a Jupiter Adept in their base class to use Whirlwind's utility function.