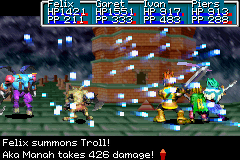 The Wild Wolf Psynergy set is a set of non-elemental and Venus Psynergies available to the Tamer Class series. The set is rather unique when compared alongside other upgrading techniques (e.g. Ragnarok and Odyssey) for many reasons. First and foremost, the later forms cost no more Psynergy than their predecessors; the entire series costs 3 PP to perform. Secondly, while the first two versions of the technique (Wild Wolf and Orc) aren't aligned with any element, the latter two (Dinox and Troll) are Venus-based. Finally, it is one of the few upgrading series with more than two forms, possessing four total variations.

This Psynergy series is exclusive to the Tamer class, which any Adept can access. The entire series is available at Level 1, and all techniques hit a single target. The stage of the Psynergy varies on the stage of the current class.

This Psynergy has a winning combination of being incredibly cheap, instantly learnable, and still decently strong. Thus, this series will generally be a staple form of attack for the Tamer. The cost does not increase for every higher stage, so this series becomes even more cost-effective with the stronger variants. This is especially fortunate since the Tamer class has the worst PP pool in the game by far. However, this series faces major competition from the Emu Psynergy series, also exclusive to the Tamer. The Emu series is learned later and is slightly more expensive; however, it also sports much more power and even a debilitating side effect for the Gryphon stage specifically. Wild Wolf's added damage tends to fall off towards the end of the game, as there are abilities such as the Roc Psynergy series and Planetary which sport much higher damage numbers. Said Psynergies are much more expensive, so the Wild Wolf series will always be a stable, if mediocre attack option.