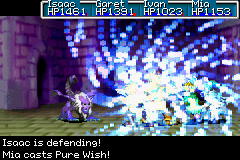 Wish, Wish Well, and Pure Wish are a series of Mercury Psynergies featured throughout the Golden Sun series that are functionally identical, but have different levels of power. The Wish Psynergies are among the most potent and effective methods available to players for healing the entire party at once and is available to a wide variety of classes.

The Wish Psynergies restore Hit Points to all party members that haven't fallen; if used during battle, they only affect currently-battling party members. The amount of HP recovered depends on the caster's Mercury Power, as well as which Psynergy is actually used.

Wish: "Restore 80 HP to the whole party.": This spell costs 9 Psynergy Points and restores 80 HP to all allies on the field. It is learned at level 12 for White Mage and Hermit series, level 9 for the Pilgrim series, and level 8 for all others.

Wish Well: "Restore 160 HP to the whole party.": This spell costs 13 Psynergy Points and restores 160 HP to all allies on the field. It is learned at level 24 for Pilgrim, White Mage, and Hermit class series, and level 22 for all others.

Pure Wish: "Restore 400 HP to the whole party.": This spell costs 20 Psynergy points and restores 400 HP to all allies on the field. It is learned on level 46.

The visual effects vary from one stage in the series to another. In Golden Sun and Golden Sun: The Lost Age, each stage resembles a collection of white/blue energy orbs gathering into each recipient in order from left to right. Each stage appears slightly larger and has more energy orbs going into each recipient than the previous stage. As of Golden Sun: Dark Dawn, the visual effects are more unique in between each stage:

As previously stated, the exact strength of the Wish Psynergies depend on the caster's Mercury Power. To be specific, the outcome can be represented with the following formula:

The Wish Psynergies are included in the arsenals of a wide variety of classes, and are available to all party members as a result. However, if all party members are left in their default classes, only Mia and Rief can cast this series. Being Mercury Psynergies, non-Mercury Adepts often require a decent number of Mercury Djinn set to access the Wish series.

Note: The following levels have not been confirmed for Golden Sun: Dark Dawn

General: The Wish Psynergies are by far the most potent group-healing Psynergies in the Golden Sun series, and easily the most practical, due partly to their low - arguably enormously undercosted - drain on the caster's Psynergy Point pool. The series' only flaw is its high Djinn requirements, leaving the Wish Psynergies unavailable until at least four Djinn of the same element are acquired. As Wish is available to nearly any class requiring four or more Mercury Djinn, as well as those classes available to Mercury Adepts that require at least four Djinn, it may be advisable to place Mercury Djinn on anyone besides the Mercury Adepts (for instance, putting Isaac or Garet in the appropriate Swordsman class series), as this will enable two party members to cast the Wish Psynergies. However, this setup trades availability for power, as an Adept's elemental Power is partly dependent on the Djinn set to them. Splitting Mercury Power between multiple Adepts reduces the effectiveness of each individual casting.

Golden Sun: If the game is being played with all party members in their default class series, Mia may spend most of her time after Altin Peak casting Ply, Wish, and her other healing Psynergies in lieu of her relatively weak offensive Psynergy. Trading Djinn with Ivan or Garet may be advisable, however, to put her in a more balanced class while retaining her access to Wish and opening the Wish series up for someone else as well.

Golden Sun: The Lost Age: None of the party members introduced in The Lost Age learn the Wish series in their default classes, although Jenna does have access to the weaker Aura Psynergy series. If players still wish to use Wish prior to the Reunion, though, it becomes available as soon as the party arrives in Kibombo: Piers has two Mercury Djinn with him when he joins the team and three Mercury Djinn can be acquired beforehand, more than enough to access the appropriate classes. Again, since the Wish series is unavailable to the new party's default classes, Piers must exchange Djinn with another Adept (Jenna or Sheba is advisable).

Golden Sun: Dark Dawn: Much like his mother in the original Golden Sun, Rief learns the Wish series in his default class series and, if the party is left in their default classes, will likely spend much of the game healing the party while Amiti provides stronger Mercury-based attacks. Since Djinn must be split evenly between party members, there won't be enough Mercury Djinn for Rief to cast Wish until reaching the Harapa Ruins (or later, if that Djinni is given to Amiti instead). Even before Wish becomes available to Rief, Karis has access to another series of group-healing Psynergies that, while nowhere near as powerful as the Wish series, have no Djinn requirements and will likely make do until enough Djinn are available to access the Wish series. In later stages of the game, however, players should consider shuffling Djinn around so that Pure Wish can be cast by multiple party members.

Like many Psynergies available to players, the Wish Psynergies can also be used by some enemies.

Golden Sun: When battling Saturos and Menardi atop Venus Lighthouse, Menardi may use Wish to restore HP to herself and her partner. It is strange that Menardi would have access to Mercury Psynergy, considering she is a Mars Adept. However, there are no Mars group-healing Psynergies in the first game, so the Wish series are the only Psynergies available to perform this task. This is rectified in the following game, where Menardi's sister, Karst, uses the newly-introduced Healing Aura instead.